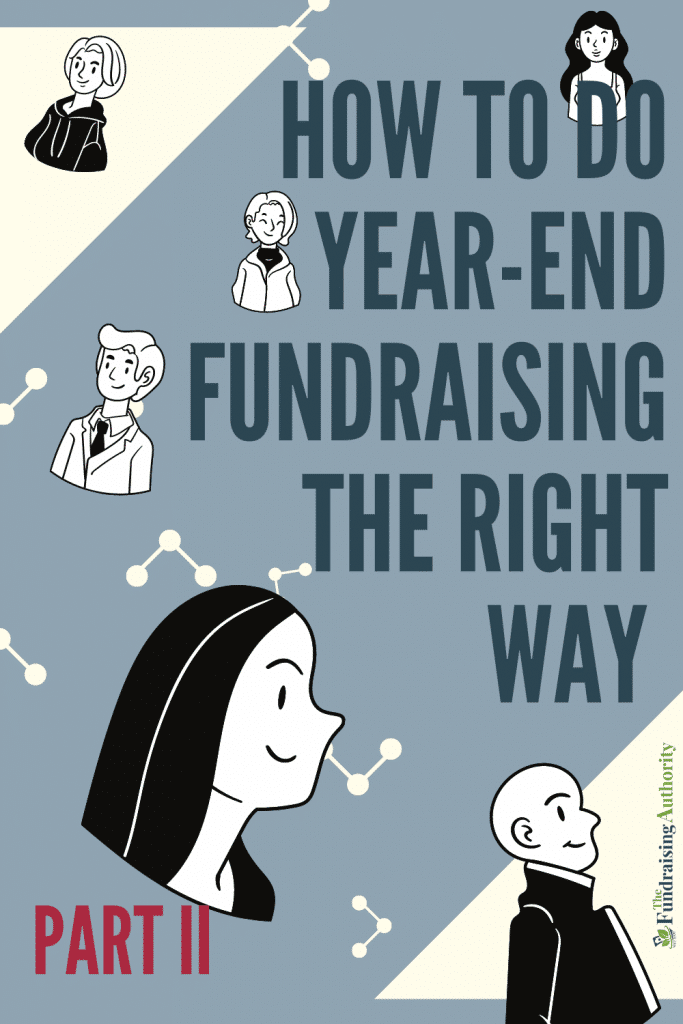 Last week, we started a three article series on year-end fundraising. The first part described why donors give during the year-end giving season. In this post, I want to talk about the strategy behind raising more money during the final 4-6 weeks of the year. In our next post, we’ll go over a step-by-step plan for maximizing your year-end fundraising.

So… what do you need to know to supercharge year-end giving at your non-profit?

The 5 Rules for Supercharged Year-End Fundraising

In working with dozens of non-profit organizations on year-end giving programs, I have found that there are five basic rules that must guide your strategy if you want to steadily increase year-end fundraising each and every year at your charity:

Running out of time before year-end?

Rule #1: Make Sure Your Message is Consistent

The first rule for strong year-end fundraising is that the message of your year-end campaign needs to be consistent with your message throughout the year.

If you’re a homeless shelter and have spent all year talking to donors about how you want to serve more homeless and thus need more money to add beds to your facility, talk about that at the year-end as well.  Don’t use the year-end giving season to talk about hiring new staff, adding a new heating unit, or holding a conference on homelessness.  Stick with adding beds.

The final 4-6 six weeks of the year is a great time for all of the seeds you have planted during the year to bloom with year-end gifts.  The only way to achieve that end is to stay on message… the message you have been communicating all year.

Rule #2: Be Mission-Focused, Not Gimmicky

Many non-profits make the mistake of trying to use gimmicks during year-end fundraising.  This applies to things like #GivingTuesday, of course, but also to the pleas that so many organizations make for “30 gifts – just 30 gifts! – by the end of the year!” or to emergency year-end campaigns that tell donors you need to raise X number of dollars just to keep the doors open next year.

Avoid the gimmicks and the hype.  Instead, see year-end fundraising as a natural part of the lifelong relationship you are building with your donors.  Keep your year-end asks mission-focused.

The year-end giving season is a great time to hit all of your fundraising bases.  That means you should never limit yourself to just one fundraising solicitation method during your year-end campaign.  Send out letters, send out e-mails, make calls, write posts on your website, hold small group meetings…

Rule #4: Cultivate Year Round in Each of those Channels

It is important to make multichannel asks during the year-end, but you want to make sure that you cultivated your donors through those channels during the earlier part of the year as well.

This is extremely important… your non-profit needs to treat the year-end giving season like a fundraising campaign, instead of one ask.  This means you need a plan, a message, and a multi-channel asking strategy.

For your larger donors, pick up the phone and make some calls, instead of just relying on the mail.  Consider holding small-group meetings, which can work very well for year-end solicitations.  Send out letters, follow up with e-mail, be active on social media.  Develop a message and a goal, and then get your team out there to implement your campaign plan.

In the final part of this series on year-end fundraising, we’ll take a look at a step-by-step strategy your non-profit can use to raise more money during this year-end giving season.

In the meantime, be sure to check out some of these great strategy tips from other non-profit consultants and authors: