Why Your Non-Profit Should Avoid #GivingTuesday Like the Plague 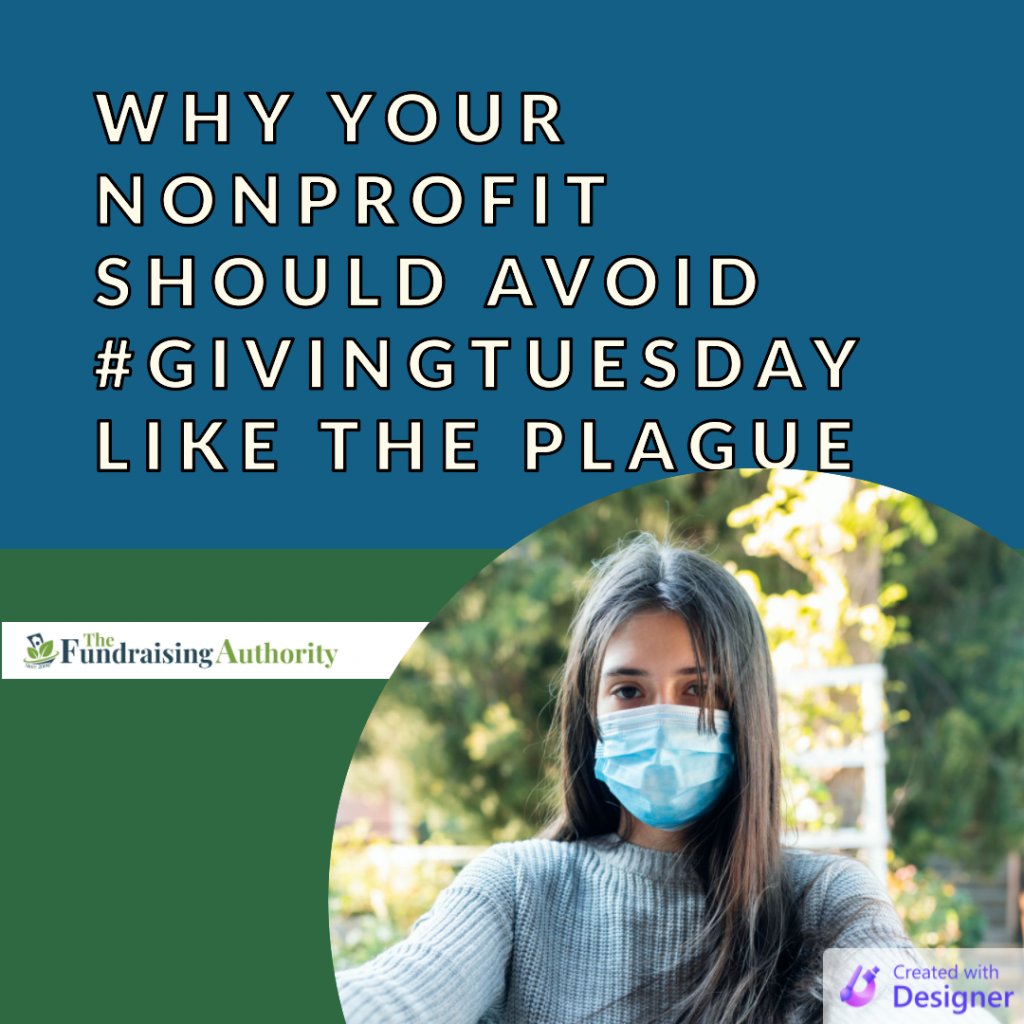 Have you heard about Giving Tuesday (or, as most people write it, #GivingTuesday)?  It’s a noble effort by those in our profession to transform the holiday season from take, take, take to take, take, give.  (For some of the hoopla, see here, here and here)

NOTE: Since publishing this article, we have reviewed the data and updated our thoughts on Giving Tuesday, here.

The idea is that everyone shops in person on Black Friday (the day after Thanksgiving, for those of you not in the US), everyone shops online on Cyber Monday (the Monday after Black Friday), so why not try to get people to give some of what they have left to those less fortunate (i.e. non-profits) the following day.  Voila!  Giving Tuesday.

Like I said, this is a noble effort.  The people behind #GivingTuesday are in it for the right reasons.  But most of the non-profits I work with are small and mid-sized organizations.  They don’t have lots of extra time or staff to run projects and campaigns that aren’t going to pan out.  They want to get down to brass tacks.  So when they ask me if they should prepare something big for #GivingTuesday, I have to tell them the truth…

And it is highly likely that your non-profit should stay away from #GivingTuesday as well.  Here’s why…

1.  Your Message Will Get Crowded Out

Non-profit direct mail fundraisers know that one of the worst times to send a fundraising letter for a charity is in the couple of weeks before a major election.  Why?  Because the candidates and their supporters are going to be flooding mailboxes with oversized postcards, self-mailers, and every other type of direct mail communication possible.

Fundraisers know that if you send a letter then, it will get lost in the barrage of letters and tossed in the trash alongside the rest of the “junk mail.”  Better to send the fundraising letter before or after election season.

The same thing applies to sending e-mails, social media messages and direct mail for #GivingTuesday.  This year, every other non-profit, large and small, is going to be sending messages that day.  How sure are you that your e-mail or social media campaign is going to be able to cut through the clutter?

Sure, you may raise some extra money that day by sending out an e-mail, but that’s not the measure of success.  The real measure of success is, if you sent out the same fundraising e-mail at a different time (say, the week after #GivingTuesday), would you raise more or less than if you sent it out on the big day?

Take a cue from direct mail experts, and send your fundraising communications on a day when your communication can be the star of the show…  not a day like #GivingTuesday when you will be one of dozens of requests your donors receive.

2.  The Truth about Social Media Fundraising

While the organizers of #GivingTuesday are trying to make it a well-rounded phenomenon, the fact is that it is still primarily a social media activity.  On the big day, social media streams are going to be flooded with messages asking people to click over to “Donate Now” pages to make a gift.

Aside from the problem of cutting through the clutter, which we mentioned above, the truth is that social media is a terrible fundraising medium.  Most people do NOT click donate now because of a social media post.

What social media is good for is sending people over to your organization’s website by posting links to interesting, compelling, and informative content.  Once donors and prospects click over to your website, you should be doing everything possible to get them to give you their e-mail address (e.g. by signing up for your e-newsletter or to receive an e-book or other giveaway).

E-mail is the killer fundraising app on the web.  Everything your non-profit does in terms of fundraising online should be geared towards getting an e-mail address from prospects with permission to use that e-mail address to send updates and news on your work – with, of course, the occasional solicitation thrown in.  For more on how to use social media the right way for fundraising, read Figuring Out Your Non-Profit’s Social Media Strategy.

Posting lots of social media messages on #GivingTuesday asking people to donate – NOW – to your non-profit is a waste of your time and the goodwill of your followers.

Many of the same folks telling you that you should be running #GivingTuesday campaigns are the same people who, for the rest of the year, tell us that we need to be focused on donor retention.  Why, then, are they pushing a “spot giving” tactic like #GivingTuesday?

Spot giving tactics are fundraising strategies that encourage one time gifts or gifts that are so tied to an external event as to take them out of the normal giving pattern for a non-profit’s donors.  For example, when your non-profit runs a crowdfunding campaign online, you are likely seeking spot giving… asking people to give over and over again, more than they normally give, or for the first time, just this once because this is so important.

Now, I’m not saying spot giving is always wrong.  If you are going to make a transformational amount of money or be able to do something that radically moves your organization forward because of the money you raise through spot giving, go for it.  That’s why I am a big fan of crowdfunding efforts.  You can raise a lot in a little amount of time to do big things.

But know that there is a dark side to spot giving.  When you later approach your donors as part of your “normal” fundraising efforts – you know, the ones that are spelled out in your donor system and your fundraising funnel – they will feel like they have already given as part of your previous effort.

And, unlike capital and endowment campaigns, which are gently pitched to pre-cultivated donors as part of an overall strategy to maintain annual donations while raising a large amount of money, spot giving campaigns use such volume and intensity of solicitation that it’s hard to fit it into a smart overall strategy.

I know you’ve seen the statistics online…  In 2012, donors gave over $10 million to non-profits online on #GivingTuesday, an increase of over 53% from 2011 (see the infographic from MDG Advertising here).  That means that #GivingTuesday resulted in somewhere between $5 million – $10 million in donations to non-profits that day.  Undoubtedly, a lot of these donations (perhaps many more than half) would still have been made to organizations, just on another day.  But, for arguments sake, let’s say that the entire $10 million was the result of #GivingTuesday.  So what?

$10 million, across the thousands of non-profits participating, isn’t that much money.  And, when you factor in the hours that every non-profit participating in #GivingTuesday spent on the project, the ROI is pitiful.

Now, there’s no way to know the full statistics from #GivingTuesday, because the numbers are spread across thousands of organizations.  But, we do know that there were 2,500 official “partner” organizations for the big day.  Undoubtedly, there were far more non-profits trying to use #GivingTuesday to raise money, but let’s stick with that low number.  Even if there were only 2,500, that means that, in the best case scenario,  the average organization raised just $4,000.

Now, that may sound like a lot, but what could your non-profit do if it spend the same amount of time on major donor calls or doing end of year donor meetings?  Let’s say you spent 5 hours on #GivingTuesday activities online.  Do you think you would have raised more, or less, if you had spent those 5 hours meeting with your top 5 donors or calling your most engaged 15 givers?

Am I the Grinch?

I can hear what you might be thinking… with all of the hoopla around  #GivingTuesday, why am I trying to put a damper on the fun?

I’m not.  And I am not in any way condemning the organizers of the day or any non-profit that decides to participate.  That’s your call, and I know that it is all a noble effort to support valuable charities.

But… particularly if your non-profit is small or time and resource challenged, I encourage you to think through the four points above before you decide to spend time on #GivingTuesday activities.  It is my belief that you will be far more successful, with far less time spent, and with far better relationships built with your donors, if you focus on other year-end giving activities, and avoid #GivingTuesday this year.