How to Prime Your Organization to Raise Major Gifts 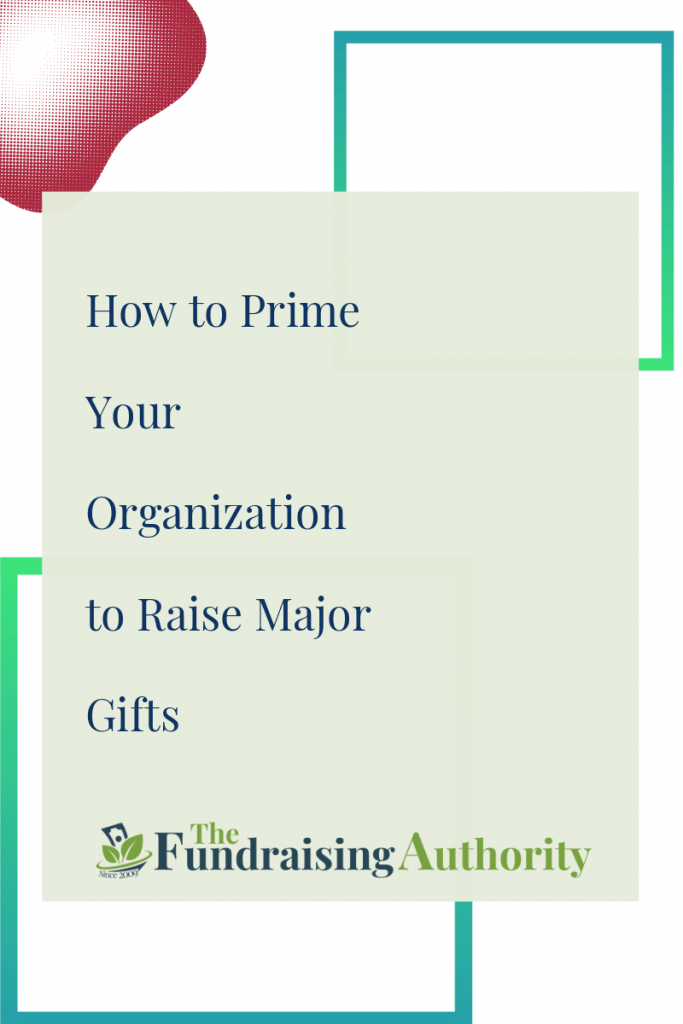 Endowment gifts, capital campaigns, and planned giving asks usually revolve around using one-on-one asks to seek major gifts from prospects. In order to ask for – and receive – large donations from your supporters, you need to prime the pump and make sure that your non-profit has put itself in the right place to do major donor fundraising.

How should your organization alter its fundraising strategy to generate more five-, six-, and seven-figure gifts?

Fill Your Pipeline with the Right People

In order to generate major gifts, you need to have prospects in your cultivation pipeline that are capable of giving gifts of that size. Thus, part of your prospecting strategy must be to find large prospects, generally through building fundraising networks with people who move in those circles in your area.

I have seen far too many non-profits that wonder why their $10 million capital campaign never got off the ground, only to discover upon closer examination that the organization doesn’t have any $100,000+ level prospects. If you’re only networking with and cultivating $500 level donors, you will not be able to raise any significant number of $25,000 or $100,000 gifts.

At non-profits I work with, I like to establish a “premium cultivation track.” This isn’t something we announce to our prospects and donors (we don’t say, “Hey! If you’re capable of giving $25,000 per year or more, call us up and join our premium cultivation group! We’ll knock your socks off!”). Instead, we quietly set up an extra level of cultivation for those prospects that we internally identify as having the potential to be larger-level major donors.

What do we do differently for those in the premium cultivation track that we don’t do for those in our “standard” cultivation funnel? It’s simple, really: we give them more personal attention. More personal phone calls from the board chair. More lunches out with our executive director. More hand-written notes.

While it would be nice for your non-profit to offer this higher-level of personal service to all of your prospects, you likely don’t have the time or manpower to be able to do so. Instead, pick out your largest prospects (your cut-off for what qualifies as a “large” prospect will vary based on the size and fundraising goals of your organization) and treat them to additional relationship-building and personal attention. It will pay off in the long run.

Major donors want to invest in major goals and big visions. To prove that point, take a moment and imagine two different major donor prospects. Both are capable of donating $1,000,000 to your organization. Both have been cultivated properly. Both are ripe to give. Neither has ever given your organization more than $20,000 in a single year.

You go to the first donor, have a great lunch with him, thank him for his past support, and ask him to make a $1,000,000 donation to your organization to help support your ongoing efforts.

You go to the second donor, have a great dinner with her, thank her for her past support, and detail for her your plan to expand your non-profit’s services to the neighboring two cities. You’re going to quadruple the number of people you serve, from 1,000 per year to 4,000 per year. You’re launching a new awareness initiative, including a brand new educational program that is being implemented in 23 local school districts. It’s going to cost another $4,000,000 over your current budget. You ask her to donate $1,000,000 to take a leadership role in your new big vision.

Now… which of these two donors do you think is more likely to give?