How to Launch Planned Giving at Your Non-Profit 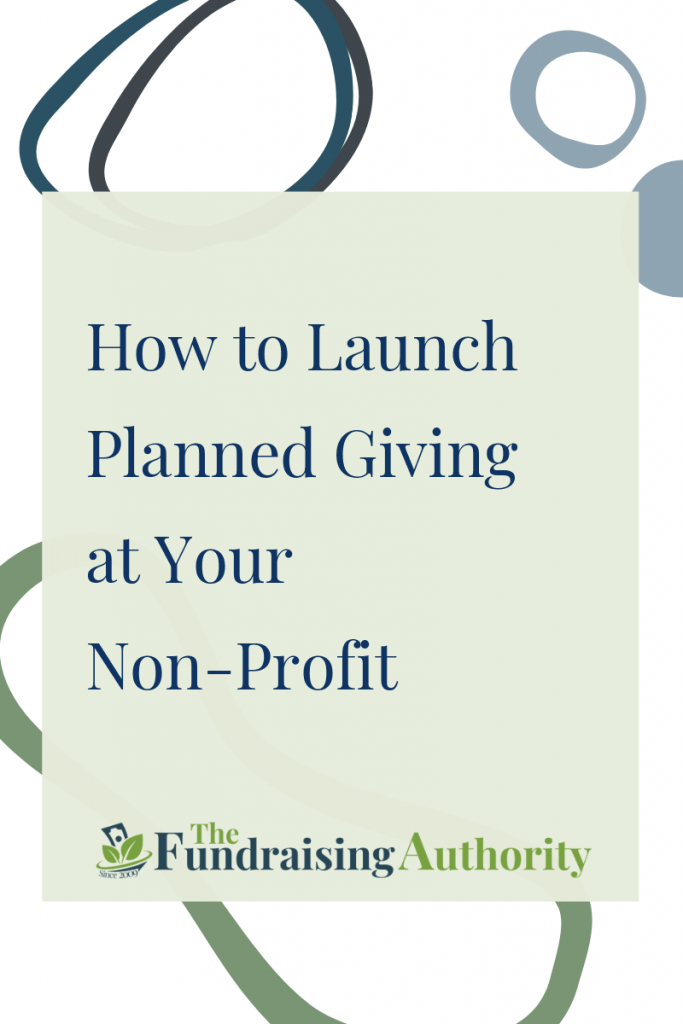 Planned giving… for many non-profits, particularly small and mid-sized organizations, it’s something we say we want to get around to, but never do. Sure, if someone leaves us a gift in their will, we’ll take it, but for many of us, we never quite get around to launching a planned giving campaign at our charity, even though we talk about it at board meetings and put it on annual “to-do” lists.

For the purposes of this article, “planned giving” is the act of making a commitment to give a charitable organization a major gift, over time or at death, as part of the donor’s overall financial and estate planning.

Planned giving vehicles can get quite exotic. Planned gifts can range from the relatively simple bequest made in a will, to gifts like charitable gift annuities and charitable remainder trusts that provide major gifts to a non-profit while at the same time returning income to the donor.

While you will eventually want to explore all of the options available to you, my recommendation if you are just starting out is to stick with launching a campaign to generate bequests – that is, supporters who agree to leave a portion of their estate to your non-profit. Then, once you have your planned giving campaign gaining momentum, you can investigate all of the other forms of planned giving available to your charity.

Before we go into the six steps you’ll need to take to launch your campaign, I wanted to talk briefly about why planned giving matters, particularly for small and mid-sized organizations. Simply put, every non-profit should be focused (in part) on finding benefactors to leave them planned gifts because there is no better way to plan for the future growth and strength of your organization.

The first step in launching a planned giving effort for the first time is to do some amount of research. You’ll want to make sure you understand (at a basic level) how planned giving works, and what basic wills look like. If you’re going to be focused on bequests, you won’t need to do much more research than that. Of course, if you’re going to be using more complicated instruments like charitable remainder trusts, you’ll need to spend more time doing research. In either case, spending an hour or two with an attorney focused on estate law would also be worth your time, just to make sure you’re headed in the right direction.

Links to several great resources for understanding planned giving are included at the end of this article.

Once you’ve gotten a basic understanding of planned gifts, you’ll want to write up a short (1-2 pages would be fine) document explaining why people should remember your organization in their will, and briefly explaining just how easy it is to do so.

You should also provide a contact person at your organization who will handle calls relating to planned gifts.

Next, I always suggest non-profits publish the information they developed in Step 2 in several places to make sure prospects and donors can find it easily. First, create a planned giving page on your website. Second, create a quick and easy planned giving brochure that you can hand out to prospective donors. Such a donor could be a more expensive full-color tri-fold brochure, or something as cheap and simple as a flyer run off on your in-house copy machine.

You’ve done your research, written compelling copy, and published the information to make sure your donors can find it. Now, you’re ready to launch your first ever planned giving campaign.

First, go to your board. (Preferably, the board chair should launch this type of campaign at a board meeting, by seeking 100% board participation). Ask your board members to take the lead by remembering your non-profit in their will.

Next, go to your key donors and supporters, and ask them to make a planned gift to your organization. This should be treated like any other fundraising ask – and for significant donors, should be done on the phone or in person.

Finally, depending on how often you make direct mail asks of your donor file, consider sending a mailing to your entire donor base asking them to consider remembering your organization in their wills.

As you approach new planned giving prospects, showing them a list of people who have made planned gifts to your organization will help them feel as if they are making a wise investment. Likewise, a Legacy Club will allow you to stay in constant contact with your planned givers to ensure that they don’t fall off of your radar and move their support to another organization.

Finally, be sure to include a small note on planned giving in almost everything your non-profit does. Planned giving information should be on your website, included in your newsletters, mentioned on your reply devices (“Check here to receive information on how to support our organization through a planned gift”). The more you remind your donors that you are seeking planned gifts, the more likely they will be to make them.

PrevPreviousTop 5 Articles of 2011… and Big News for the Podcast
NextFundraising Authority Podcast #3: How to Build and Use Fundraising NetworksNext
Article Archive