The Dark Underbelly of Non-Profit Development 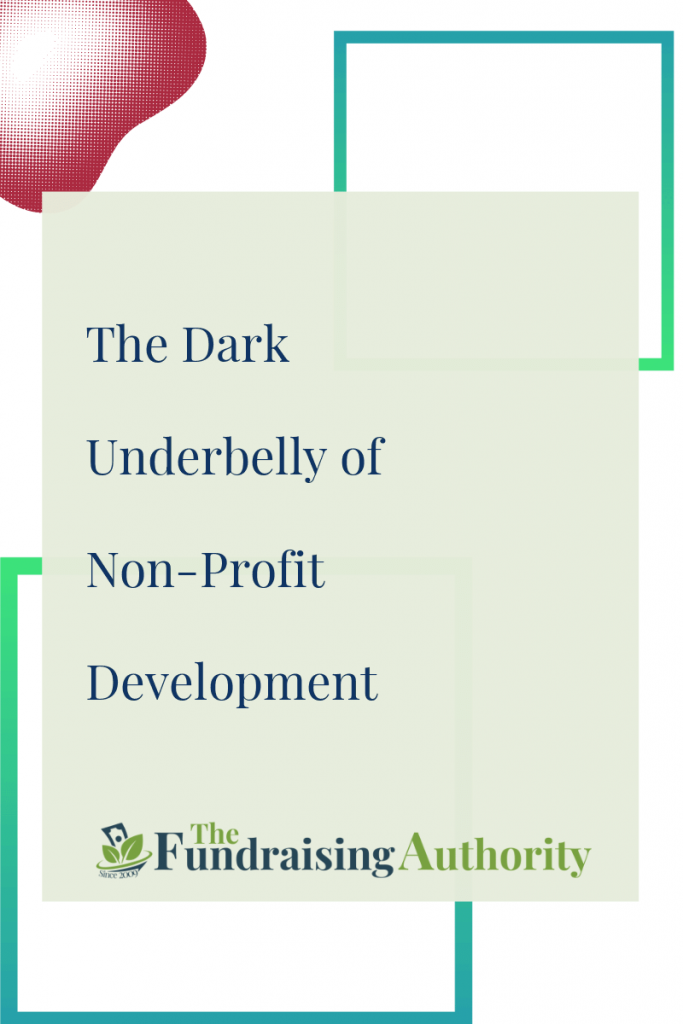 If you’re in non-profit development, chances are that over the past two weeks you’ve read about the recent CompassPoint study Underdeveloped: A National Study of Challenges Facing Non-Profit Fundraising. Everyone is talking about it (e.g. here, here and here).

The truth is if you’re in fundraising, deep down you already knew what the report found:

As someone who has been in fundraising for a number of years, this report really doesn’t shock me. What it does do is shine a light on the dark underbelly of the non-profit development world… it’s something we all know but don’t like to talk about in public very often.

The way I see it, the findings noted above are symptoms of a larger problem, one that has two main causes:

#1: Non-Profits Are Ashamed of Having to Resort to Fundraising

How many times have you heard an executive director or board member approach a prospect and say something like, “I’m really sorry to have to ask, but we rely on fundraising to keep our doors open. Would you be willing to buy a ticket to our annual dinner?” I have heard that fundraising gem far too often.

This is one reason why so many non-profit executive directors love grants. They don’t seem like fundraising. They’re more like writing a report, and if you get a good grade, you get the money. So many folks at non-profits would rather do anything then look someone in the eye and ask them for a gift.

How many development professionals have walked into an interview for the top fundraising job at a non-profit and have had the executive director casually (and constantly) talk about how much she hates fundraising? How many non-profit websites have you visited where when you checked out the staff listing, the program people were listed above the development staff? I notice things like this, and the answer is… most!

When non-profits are ashamed of having to fundraise to support their missions, development offices become miserable places to work. Who wants to work for an organization that is ashamed of what you do? Who would choose, day in and day out, to be out in public asking people to part with their hard earned dollars to support the mission of a non-profit that would rather they didn’t have to hire you at all?

How many times do we have to say it? Non-profits, listen up: Your mission matters. Without fundraising, you will not be able to carry out that mission. Neglecting your fundraising is neglecting your mission. Businesses like to sell more in order to generate more profit. Non-profits should like to fundraise more in order to do more good in the world.

#2: Non-Profits Refuse to Pay Development Staff What they Are Worth

Looking for a job in non-profit development is a miserable task. You walk in and hear that the goal for the position is to write and implement a plan to raise $1,000,000 per year. The last person in the job failed and was fired. There hasn’t been anyone in the job for 8 months. The board “isn’t a fundraising board,” so they don’t provide much help. It’s going to be an uphill battle.

Then, you hear the punchline. The job pays $40,000 per year. You have to share an office with two other people. No, they won’t buy you a laptop so you can work in between donor meetings. Yes, they have healthcare coverage, but you have to pay 85%, they only pay 15%. And only for you. 0% for the rest of your family. You also need to work some nights and weekend. When can you start?

Seriously? Who puts up with this? Are you treating your development staff this way?

If the same person was walking into a comparable for-profit sales job, one that was responsible for generating $1,000,000 in sales per year, they’d get $100,000 per year at least. Plus their own office and better benefits. Plus any technology they needed to get the job done. And maybe a performance bonus too.

I know, I know… this is a non-profit. I can hear you saying it… development professionals shouldn’t expect to make the same as their for-profit counterparts.

My favorite is walking into non-profits that raise money and give the majority of it out in some form of grant funding to other projects and organizations, and where the person responsible for bringing the money in (the development director) is making $50,000 / year but the person responsible for spending the money (the program director) is making $85,000 / year. Fundraising is hard work. It takes skill and patience. Why aren’t you hiring people who are good at it, giving them the tools they need, and paying them a salary that is not only livable but shows the priority you place on fundraising at your organization?

A Call to Action for Non-Profit Organizations

It’s time to change the culture of philanthropy at most non-profit organizations. It’s time for charities to be proud to ask for money, because more money means they can do more good. It’s time for non-profits to pay development directors and staff members what they are worth, hire enough team members to do the job, and equip them for the difficult but important tasks ahead.

Non-profits, wake up! You could be doing far more for those you serve, if only you would embrace and prioritize fundraising at your organization.