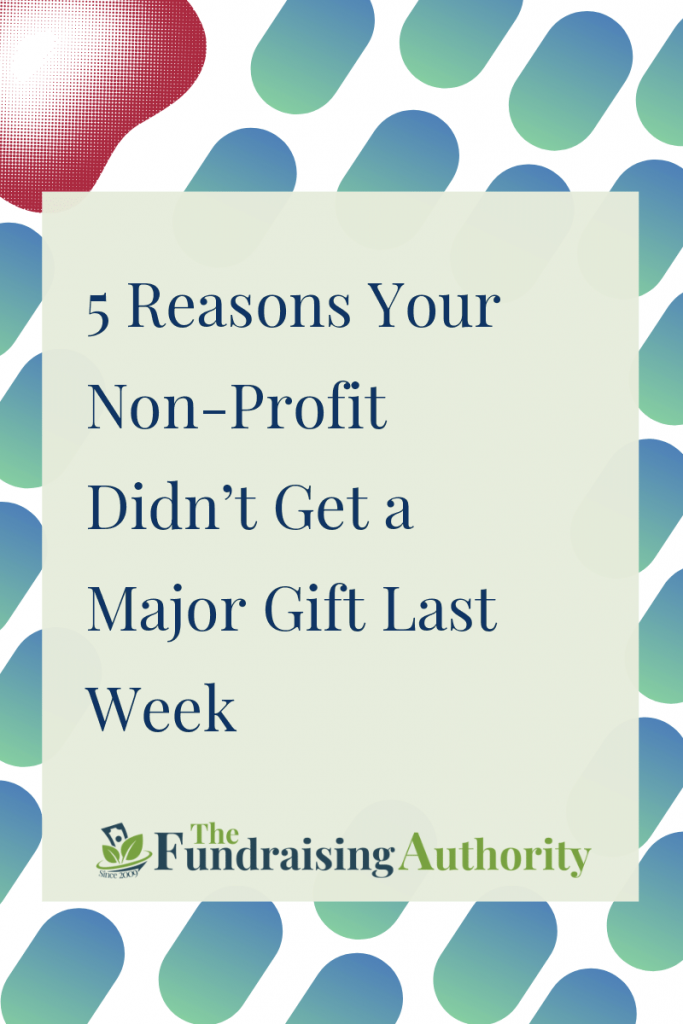 Sometimes, non-profit fundraisers treat opening the organization’s mail like playing the lottery. We know it’s highly unlikely that there’s a big check in one of those envelopes, yet we gleefully tear through the mail, hoping to find a surprise donation, an early payment on a major pledge, or a new big sponsorship for our next event.

It’s exciting, because rarely… very rarely… perhaps once every couple of years… we do find that unexpected big check. But the excitement is short-lived, and after opening the mail, we return to sending out thank you notes, answering e-mail, and planning next month’s silent auction.

Some non-profits, though, do get major donations on a regular basis. There are organizations out there that receive big (and expected) checks on a quarterly, monthly, or weekly basis. Here are 5 reasons why your non-profit isn’t among them:

Most non-profits never have enough major donor prospects. The vast majority of organizations I have worked with have one, two or three major donors on their “wish list,” people they have talked to once or twice, and who could afford to give a major gift, but who aren’t ready for an ask. If you’ve only got two or three major donors in your pipeline, you’re not going to get large checks with any regularity.

A strong major donor program requires that you have a lot of major donor prospects. The best ways to find new major donors are to ask for referrals from current donors, build a fundraising network, and hold non-ask events to constantly expand your network.

If you have lots of major donor prospects that you have talked to at least once, but still don’t get lots of major gifts, then it is highly likely that you don’t have an effective cultivation funnel for your prospects.

A cultivation funnel is a system for moving your prospects from first meeting to ask, through regular communications, cultivation, and relationship-building. In order to be effective, your funnel must be systematized and easy to use for your staff, board and volunteers.

You would be surprised how many non-profits have really good major donor cultivation programs but never get around to actually making asks of their major donor prospects, instead figuring that people will give “when they are ready.”

This is a huge mistake. Your non-profit must be moving major prospects towards an ask. The process between first meeting and first ask needn’t take longer than 6 months. And the ask needs to be an actual, concrete ask. Something like… “Mrs. Jones, would you be willing to make a $50,000 gift to our organization this month to help us help more people?”

If you don’t make asks, you won’t receive big checks.

#4 – You’re Not Asking for Upgrades

The best prospects for new major donations are your current major donors. Every non-profit should have a process in place for not only asking major donors to renew (give again) year after year, but also to upgrade each year by increasing the size of their gift.

The best way to build relationships with major donors – both current donors as well as major donor prospects – is to pick up the phone, call them, and say hello. The conversations need not be long and drawn out… a simple, 5 minute conversation can suffice. Major donors love personal attention, and by picking up the phone, fundraisers can easily communicate with 5-10 major donors per hour.

When was the last time you picked up the phone and called your major donor prospects, just to stay in touch? If you’re not picking up the phone, you’re probably not getting major checks every week.