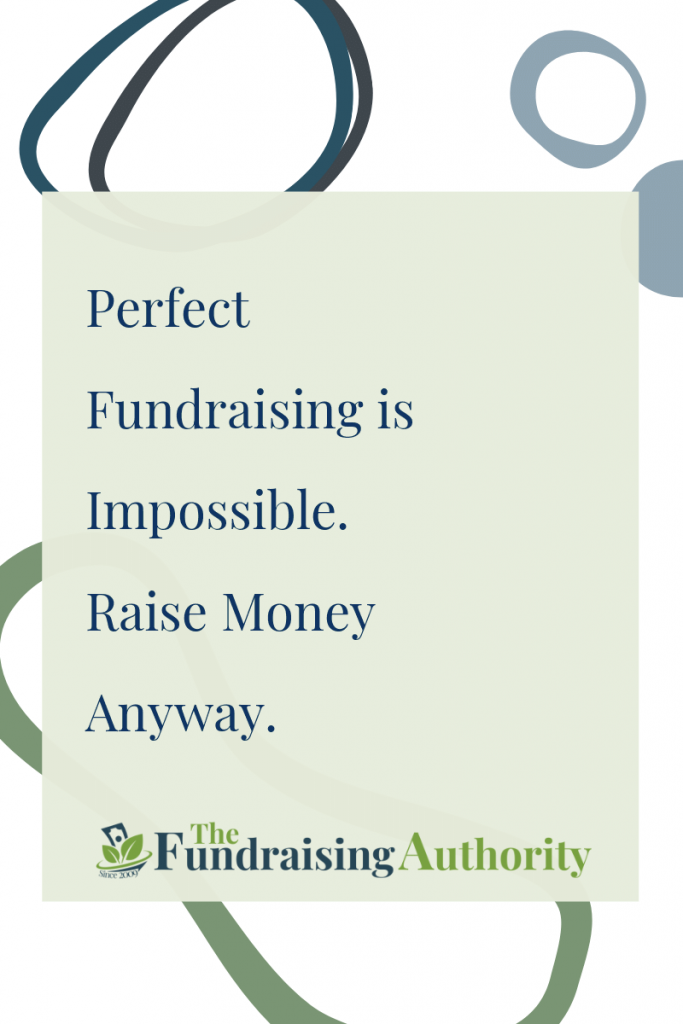 As the amount of fundraising knowledge available to the average non-profit grows, many organizations get stuck in the pursuit of perfection. They know the way things are supposed to be, and they refuse to implement something new unless they can carry it out 100% “by the book.”

Or… they lack perfect information about a donor, prospect, or company, and are wary of approaching that person or entity until they can figure things out completely.

When your organization lacks resources, chances are, you won’t be able to fundraise perfectly, exactly the way you want to. But that doesn’t mean you shouldn’t be trying new things and moving forward – if you don’t try big things in your fundraising strategy, you’ll never be able to do big things on the program side, because you won’t have the money to resource them.

Don’t let perfect fundraising be the enemy of good fundraising. Here are three key places where I see non-profits get tripped up because they want to fundraise perfectly, but can’t:

“We raise all our money from grants. We don’t have time for working with individual donors!”

Yet, I’ve heard from several non-profits that feel locked in to grant fundraising. They raise most of their money from grants and have a professional grantwriter on staff, often without any other fundraiser on the team. They say, “We can never shift over to 80% individual giving, so we might as well stick with grantwriting.”

This is a mistake. Non-profits that raise most of their money through grants don’t need to shift to individual giving in one fell swoop. In fact, doing so would be a mistake, because building individual donor relationships takes time.

Instead, these organizations should start slowly, by reserving a portion of the Executive Director and fundraising team’s time to do individual donor calls and meetings. The goal here is to slowly wean off of grants, not to go cold turkey.

“My board doesn’t know anyone with money!”

When I tell non-profit fundraisers that their board members should be serving as fundraising ambassadors for their organization, they often say things like, “It’s not worth it – we don’t have a money board – they don’t know any major donors!”

Once again, this is a huge mistake. Every member of your non-profit’s board should be making positive contributions to your development program. You don’t need a board full of Rockefellers and Vanderbilts to have a successful board fundraising program.

Start slow. Everyone on your board knows people. And all of those people have money. That’s right- one of your board members might only know 4 other people (I doubt it, but possible) and each of those 4 other people might only be able to donate $10 to your organization (again, doubtful)… but those are people with money, albeit small amounts. And… those 4 people know other people, all of whom have money. And so on, and so on.

“I have no idea how much to ask this donor for!”

Have you ever cultivated a donor for a while, but when it came time to make the ask you felt “stuck” because you weren’t sure how much to ask the donor for?

I have talked with dozens of fundraisers who get to that point with a donor and then either agonize over the ask amount or put the donor on the “back burner” until they gather more information… and then never get around to making the ask.

This is a huge mistake. Instead of playing the waiting game for more information, do 15 minutes of research, and then make your best guess about your donor’s capacity. Don’t wait to make the ask. You’ll never have 100% perfect information, and that’s ok – if you ask for too much, your donor can always offer a lesser amount.

Don’t make the perfect the enemy of the good.