Case Study: How One Non-Profit Moved from Grants to Individual Giving 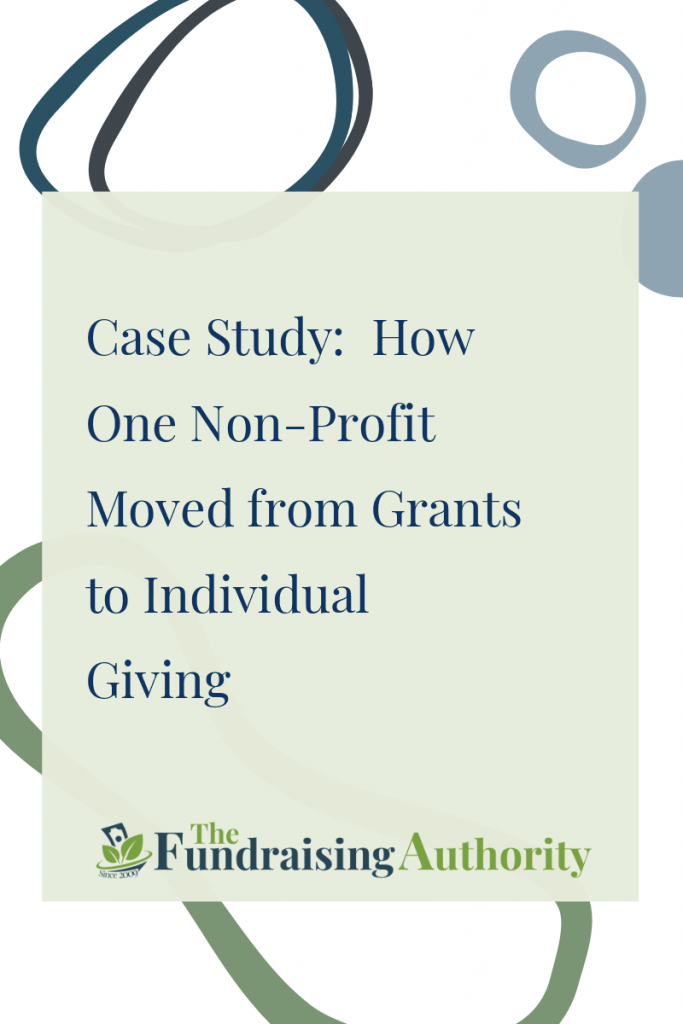 Recently, I had the opportunity to work with a great social service non-profit doing phenomenal work. My objective for the project was to help them strengthen their development organization and write a three-year fundraising plan to guide their efforts.

Very early on during the research phase, one thing became strikingly clear: this non-profit was relying far too heavily on grant-writing to fund its work.

Now, don’t get me wrong… grants have a place at the development table. For many organizations, grants can and should provide a significant source of funding. But a majority of funding? Almost never. Few and far between are the non-profits that should be making the majority of their revenue from grant-writing.

Why Being Grant-Heavy is a Bad Thing

I’m sure you’ve seen the statistic before, but it bears repeating: in the United States, over 70% of all charitable contributions are made by individuals. Many other nations boast similar numbers. This means that of the billions of dollars available to non-profits each year, the vast majority is given out by individuals, not foundations. Shouldn’t you cast your net where the fish are?

Building a strong and ever-growing individual giving operation is crucial to your success because it provides security, in several different ways:

First, individual donors are far more loyal and far less fickle than foundations. Grant-making foundations often change priorities, and most have fairly arbitrary rules that are subject to change at any time. Individual donors tend to stick with a non-profit until the organization either does something to offend them or something to bore them, both of which are, to a large extent, within the control of the organization.

Second, if you have a strong base of mid-level and above individual givers, you won’t have to close up shop if one or two of them stop giving. On the other hand, if one or two of your major foundation supporters stop giving, it may mean significant trouble for your organization.

On the other hand, if your non-profit is “protected” from this scenario because you’re getting most of your funding through dozens or hundreds of $2,000 and $5,000 grants, chances are you’re spending way more time on grant writing than you would have to on an individual giving program of the same capacity.

Once I convinced the Executive Director and the board of the organization that they were far too grant-heavy, they agreed that they needed to spend more time growing a strong and sustainable individual giving program. We didn’t end the grant program, on the contrary – grants remained in integral part of the organization’s fundraising mix. However, we did drastically increase the time and resources spent on the individual giving side.

The plan we came up with for rapidly growing that program was as follows: First, put the necessary infrastructure in place. Second, utilize our existing connections to build our network. Third, put a scalable system of cultivation opportunities into action.

1: Put the Necessary Infrastructure in Place

Because the organization I was working with did not have a large individual giving program in place, they didn’t feel that they needed to do a lot of donor communication, other than doing meetings once or twice per year with each of the foundations that supported them. I told them, however, that in order to succeed with individual fundraising, they would need to have a donor communications plan in place.

We developed a donor communications plan that included donor newsletters, e-updates, an annual “thank you dinner,” and several open houses for donors and prospects. We also put a donor funnel in place that indicated the correct sequence of communications and asks for prospects that entered our universe.

2: Utilize Our Existing Connections to Build Our Network

Because we had a large number of young professionals who came to our annual black-tie dinner, we also decided to put together a “Young Friends Of” affinity group to grow our connections in that demographic.

3: Put a Scalable System of Cultivation Opportunities into Action

Finally, in order to help our supporters introduce us to their connections, as well as move friends into donors, we launched a series of cultivation opportunities, including non-ask events, volunteer opportunities, and a small seminar series highlighting the organization’s mission in the city. These functions were placed onto a year-long calendar to allow time for planning and marketing.

As a result of this new plan, over the course of the past six months, this non-profit has added over 300 new prospect names to its database, has held three packed open house events, and since launching the “ask” phase of the program has brought in almost 50 new individual donors to the organization, a significant percentage increase over past efforts.

Is your non-profit “grant-heavy?” What can you do to launch (or re-launch) your individual giving program?