The Five Deadly Sins of Fundraising 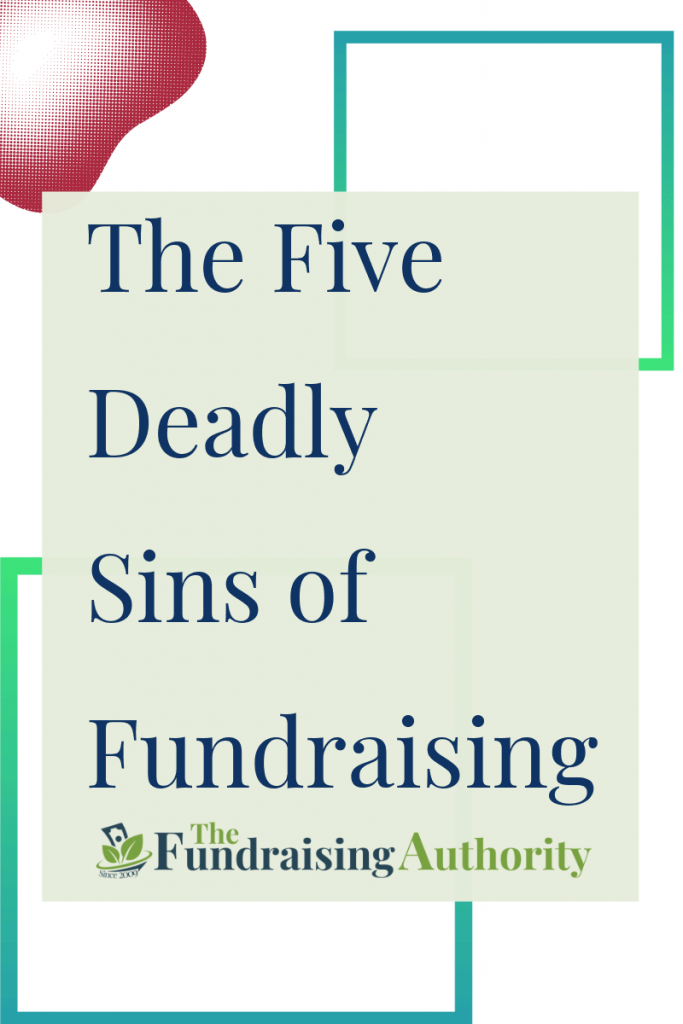 Non-profit fundraising may be rewarding, but it is also hard. Getting out there day after day to raise money for an organization is vital but challenging work. That’s why charities face the temptation to cut corners here and there as they make the fundraising rounds. They stop pushing, and start settling. That’s how otherwise strong and successful development operations fall into the five deadly sins of fundraising:

For so many non-profits, the development office is a second-class citizen. Sure, non-profits know they need to fundraise, but many organizations see development as a “necessary evil,” something to just get through so they can get to the good stuff… the programs and services they offer that are integral to their mission.

Organizations that relegate fundraising to second-class status will never, ever reach their full potential. They will never serve as many people or groups as they otherwise could. They are artificially limiting the amount of good they can do. Fundraising isn’t just part of your work – it is central to your work. Your development office isn’t in competition with your mission, it is driving your mission by making all of the work you do possible.

Many non-profits that manage to avoid the first deadly sin fall victim to the second. Yes, the prioritize fundraising. Yes, they know development is important, and so they give it a seat at the table – a central role in carrying the non-profit forward. But… they think way too small.

Charities exist to make the world a better place. They have big missions and solve major problems for millions of people. Yet many of them think small when it comes to fundraising. You know you have found a small-thinking non-profit when you hear things like, “let’s set a goal of raising 5% more this year than we did last year.” Or, “we can only serve 20% of the homeless in the city this year. Next year, let’s raise enough to serve 30%.”

That’s small-ball fundraising, and your non-profit deserves more. Remember, if you’re going to be thinking anyway, you might as well think big. And, if your organization is stuck in a fundraising rut, there are ways to break out of that plateau.

Organizations that take the easy way out are selling their missions short.

Taking the easy fay with fundraising can take several different forms. For many non-profits, taking the easy way means avoiding in-person asks and cultivation at all costs. These charities never ask in person when they could call or write an e-mail. They like events better than lunches with prospects, and they prefer direct mail and newsletters to events or phone calls. They want to make fundraising “easy.”

Other organizations take the easy way by always asking for too little. They know a prospect could afford to give $10,000 but they worry that if they ask for that much, the prospect might be offended or offer objections. They don’t want to think through a strategy for dealing with the objections, or consider ways to properly cultivate the donor so that she is comfortable with a $10,000 ask. So instead, they ask the donor for $1,500, or some other number they know she will say “yes” to.

Non-profits that take the easy way out perennially raise less than they otherwise could. They are always short on their goals, always spending way too much time on fundraising with far too little return. Instead, these organizations need to understand that fundraising is hard. There is no “easy way” to become a thriving non-profit. It takes guts and hard work. Remember, donor interactions are hard to navigate, and holding a fundraising event should never be your entire fundraising strategy.

I am a big fan of building fundraising networks – cultivating and stewarding your donors in such a way that they happily open up their own Rolodex to help you find new prospects for your organization.

Sadly, many non-profit misunderstand this concept. They forget that you always need to cultivate before you ask. Instead, they try to get their supporters and board to strong-arm their Rolodexes, calling in favors and shaming people to give donations. They constantly berate their donors to sell five tickets to the event, add ten names to the mailing list, and raise $500 for the annual appeal.

None of those goals are bad, but if your board and donors are shaming, forcing, or cajoling people into giving, those people who give will be one-time donors. You will not grow a relationship with them, and they won’t want to be part of your cultivation or stewardship funnels. Strong-arm fundraising is a surefire recipe for constant fundraising aggravation.

Remember, your goal is to maximize lifetime donor value, and in order to do that, you have to follow the formula: prospect, cultivate, then ask.

The fifth and final deadly sin of fundraising is a failure to innovate with your fundraising strategies and tactics. Many organizations who hit all of the other milestones miss on this one. They prioritize fundraising, they think big, they build relationships instead of strong-arming donations, they don’t fall for the easy way… but they never innovate. They figure, “it’s always worked before, so why change anything now?”

Organizations that fail to innovate don’t maximize revenue, and they often fall victim to sudden changes in their fundraising fortunes. One non-profit I know relied on a gala event for 50% of their annual fundraising goal. They didn’t see any need to innovate. The local pro football team always served as the lead sponsor for their gala, and the players all came and donors came to the event to mingle with the players and have a great time.

Then, the team changed owners. The new owner was less interested in education (this non-profit’s mission area) and more interested in childhood cancer research, both worthy areas of interest. The first year, the new owner made a much smaller sponsorship gift, but still sent the players at the behest of the team’s PR rep. The reduced donation hurt the organization, but they still did ok because lots of people still bought tickets to the event.

The next year, the team dropped the sponsorship all together, and none of the players came. This killed the event. People were far less interested in attending, and event revenue dropped by over 60%. In just two years, the organization lost over 30% of its annual operating revenue. All because they had rested on their laurels, and refused to innovate.

How does your non-profit stack up against the 5 deadly sins of fundraising? Which sins tempt your organization? What can you do to get back on the straight and narrow?