Winning the Battle Against Fundraising Fatigue 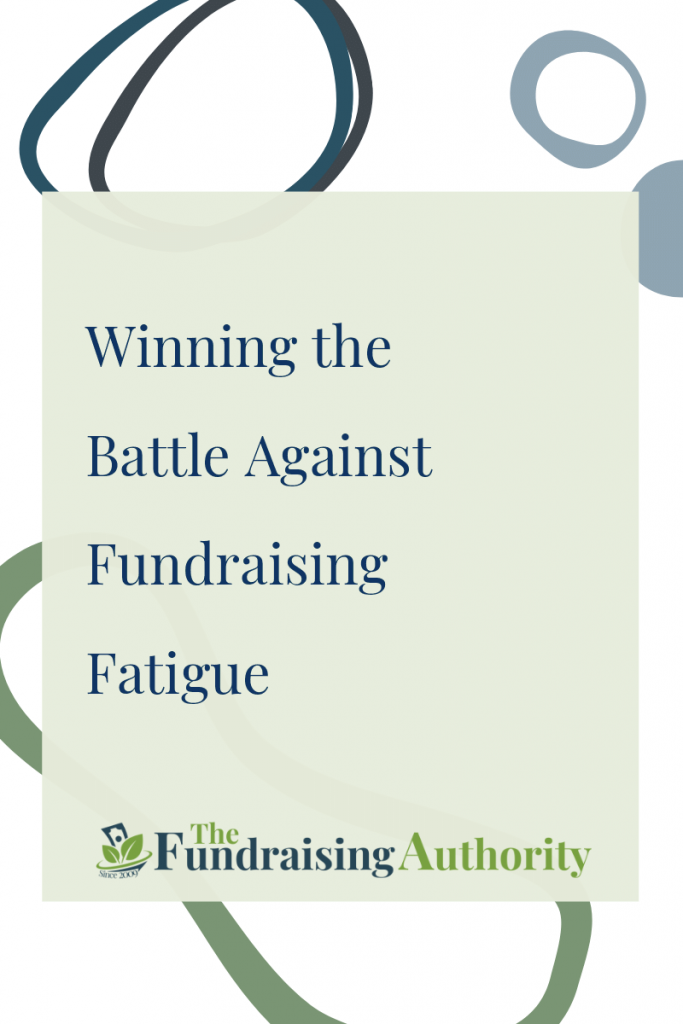 In the non-profit world, we often talk about “donor fatigue,” that dreaded illness that arises in donors when we pitch them for gifts over and over again. What we don’t talk about enough, but which is equally perilous for our organization’s success, is “fundraising fatigue.”

If you’ve been in development for any length of time, you know what fundraising fatigue is… the feeling of dread over having to make yet another round of asks, the terror of having to pour over prospect lists, set up silent auctions, and attend networking events, the urge to e-mail your network rather than making calls because you can’t bear the thought of picking up the phone again.

Fundraising fatigue strikes everyone in non-profit development at one time or another, and for many development pros, (even the best of them!) it strikes cyclically, every month or every quarter or every year.

Of course, fundraising fatigue is dangerous for non-profit organizations, because these orgs rely on their frontline fundraisers to provide the capital they need to operate and grow. This situation is also troubling to development officers, many of whom still love their non-profit and its mission, and yet they have difficulty shaking the feeling of malaise.

If (when!) you feel the unmistakable yoke of fundraising fatigue in your own career, here are some great ways to get back into the game:

First and foremost, consider taking a short break from the fundraising action. Spend a day at the beach, or go to a non-profit fundraising conference that requires you to do nothing more than listen and learn. Volunteer for a day at another non-profit that has nothing in common with your place of work. Or, simply spend a day with your kids.

Taking a short break is a great way to shake the fundraising doldrums, and is nothing to be ashamed of. Heck, that’s why vacations were invented!

Quite frankly, this is my favorite way to shake my annual fundraising fatigue. Often, non-profit pros feel the burden of fundraising because they follow the same script year after year: board giving campaign, united way, major event, direct mail annual appeal, e-mail newsletters… and on and on, on an annual cycle.

One of the best ways to break out of the rut is to shake things up by launching a big new initiative. Maybe it’s a fundraising initiative, maybe it’s a communications / marketing idea, maybe it’s a PR effort. Whatever it is, think big, and you won’t have time to dwell on your fundraising malaise. For more on this, read Thinking Big in Fundraising.

Business owners have known for some time about the benefits of mastermind groups – groups of business owners from similar industries who get together on a monthly or quarterly basis to talk about the issues they face, share ideas, and get help.

Have you thought about starting a local non-profit mastermind group, composed of executive directors or development directors from non-profits in your area serving all different sectors? Such a group could share insights, work on problems together, and be a place to vent frustrations to an understanding group of your peers.

Whatever path you take… don’t wallow in your fundraising fatigue. Your non-profit and the people it serves are counting on you!