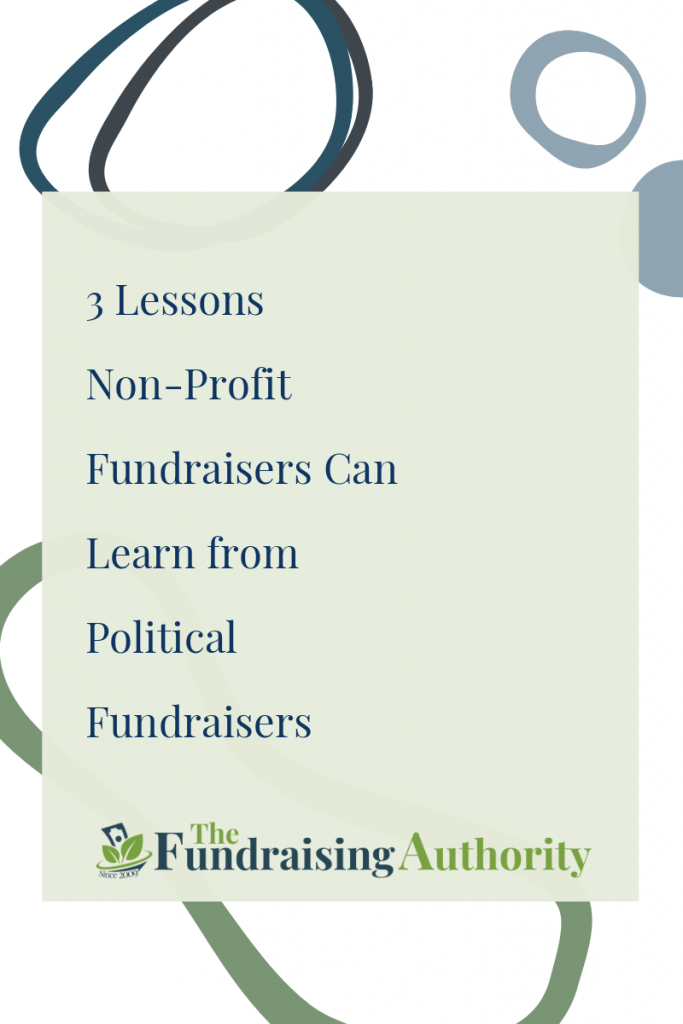 As someone who has spent a great deal of time raising money in both the non-profit and political realms, I can tell you that each sector has its own strengths and weaknesses.

Despite the popular conception among non-profit pros, both types of fundraising have a lot in common. Both require you to build fundraising networks, make asks, hold events… However, during my years as a professional political fundraiser, I learned a couple of things that have served me well on the non-profit side. Here are three key lessons that non-profit development pros can learn from their political counterparts:

In political fundraising, a “bundler” is someone who has the ability to raise a significant amount from their own network, friends, and colleagues, with minimal support from the campaign.

These people are especially important in states and municipalities where campaign donations are limited by legal caps on the amount people can donate. For example, if individuals can only donate $500 per person, and your campaign needs to raise $1,000,000 to win, you’re in a tough spot. If, on the other hand, your campaign can find 25 bundlers (usually people who are well known in the political universe) to each raise $20,000 for your campaign, you are halfway there. Generally, the only support a bundler needs from the campaign might be for the candidate to show up at their house for a fundraising event or send out some signed photos.

This principle works equally well with non-profits. Most non-profits expect their board of directors to be bundlers, even if they don’t know or use that word. But how many non-profits are putting together separate committees composed just of bundlers? How about encouraging bundlers to hold a hosted event on your behalf? Are you seeking bundlers to raise money for your non-profit, with little or no outlay or resources necessary from your campaign?

In a political campaign, if a staffer at a local office comes across a wealthy campaign volunteer, or sees a well-off businessperson at a campaign event, he or she will kick that person’s information “upstairs,” to the campaign HQ, and specifically to the campaign’s Finance Director (that’s the political equivalent of a Development Director). The Finance Director will then call (or assign someone to call) the contact to try to build a relationship. In a political campaign, everyone is on the lookout for fundraising possibilities.

By contrast, in many non-profits, the development staff is isolated from the program staff. The program staff doesn’t think of fundraising as its responsibility (isn’t that why we have a Development Director)? This causes lots of missed opportunities.

Teach your program and support staff how to notice fundraising opportunities, and establish a rapport between the development and program staffs that allow for great communication.

Political campaigns are a zero-sum game, time-wise. They have a start, and they definitely have an end: Election Day. Unless the campaign is in debt, the only fundraising that matters is the fundraising that happens before Election Day. Getting a check the day after might matter for the next campaign, but it won’t effect the outcome of the current one.

Political fundraisers understand the value of building a relationship and cultivating donors. They focus on the same things that non-profit fundraisers do: meetings, cultivation calls, letters, newsletter updates, etc. They also realize, however, that they don’t have all day (or all year) to build up to an ask. For that reason, political fundraisers are experts at “condensed cultivation,” maximizing each opportunity to build a strong relationship quickly and move to an ask.

Many non-profits, on the other hand, spend far too long cultivating donors. Sometimes, cultivation is even used as an excuse for procrastination… “I don’t feel like asking this person for money, or am scared they will say no. So, I have to keep “cultivating” them.” This leads to paralysis, and often, missed opportunities. I’m not saying you should skip the cultivation step. What I am saying is that cultivation has diminishing returns… if you can’t move someone to a gift in a reasonable amount of time, it is unlikely you will be able to move them to a gift at all.

How can your non-profit condense its cultivation period and maximize each donor touch?