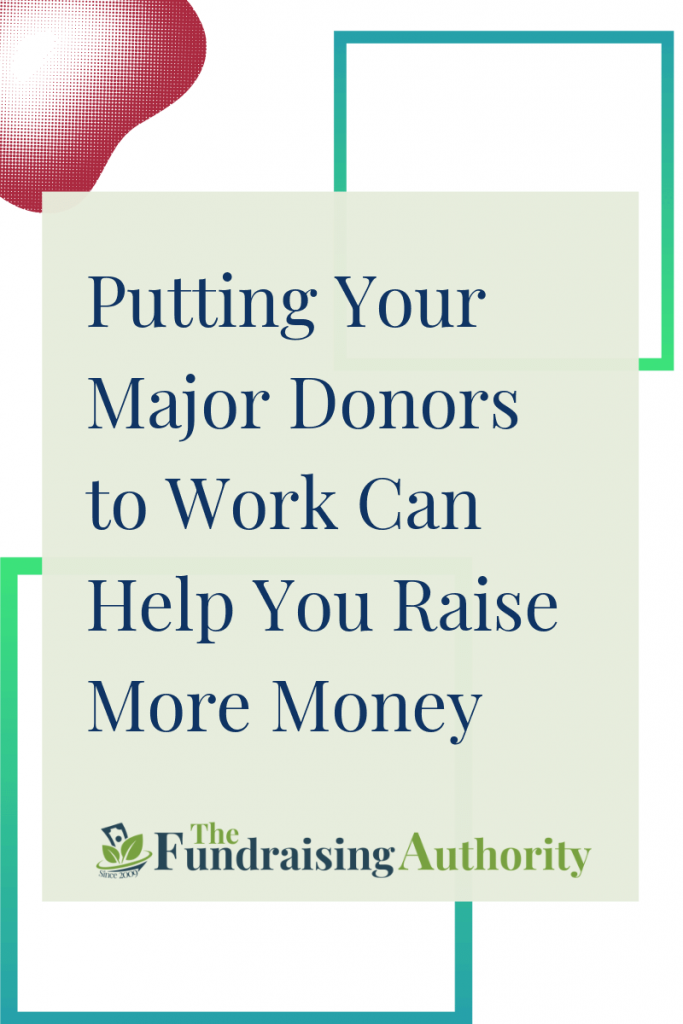 I want to tell you a quick story about a donor I worked with several years ago while I was on the staff of a non-profit. This person was a very large donor to the organization… he and his business had given hundreds of thousands to the non-profit over the years.

The organization had done everything right. They met with him regularly, thanked him profusely, and kept him updated on the programs he was supporting. This donor’s gifts grew each year until suddenly leveling off. After that, they remained at the same level for several years, despite the donor having the capacity to give much more.

The non-profit was trying to figure out a way to reignite the donor’s passion and get him to increase his gifts. They tried more personal meetings, a special recognition opportunity, and more… but nothing worked. That’s when I suggested that the charity try putting the donor to work.

Another way to activate donors is to ask them to do some volunteer work for the organization. Many non-profits shy away from asking major donors to volunteer, because they figure the donor has already given so much. This is a mistake – many major donors (but not all) would love the chance to roll up their sleeves and get involved as a volunteer. Due to the nature of its work, this organization didn’t have many volunteer opportunities available, and thus wasn’t able to ask the donor to get involved in that way.

Luckily, we were able to come up with another way to put this major donor to work and to ask him for something other than money. Instead of asking for a check, we asked the donor to come in to our office and spend 30 minutes on camera telling us his story, how he got involved with the organization, and why he supports our work.

This filming was part of a larger project we were doing to create some fundraising videos for the organization… and the donor was thrilled to be asked to participate. He loved that we valued his story and thought highly enough of him to ask him to represent our non-profit on camera. We asked him to come in for 30 minutes, but he stayed at our office for an hour and a half, despite his busy schedule that day.

Later that year, in response to our annual campaign mailing, this donor sent in a check for double the amount he had given to us the previous year. The donor had always previously given as a result of a phone call or in-person ask, never via the mail. We didn’t ask for more money, and didn’t tie the mail ask to his appearance on our video.

How can your non-profit put its major donors to work this coming year?