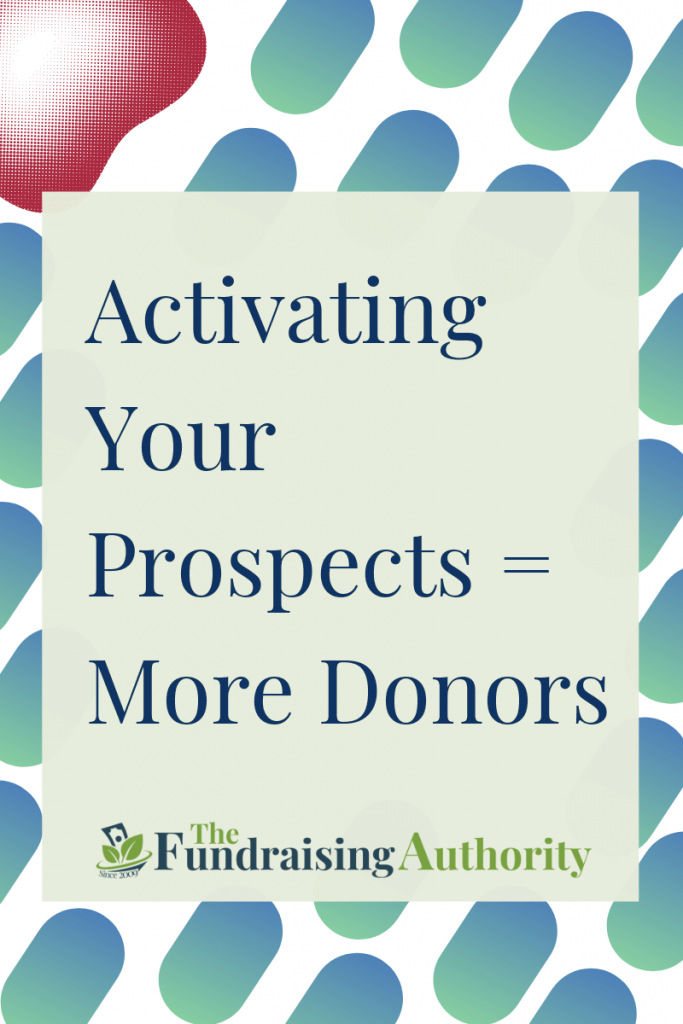 For many non-profits, the process of turning new prospects into donors goes like this:

We meet a potential donor, talk to them, add them to our newsletter list, invite them to a non-ask event, stay in touch with them, and then make an ask.

There’s nothing wrong with that process. The cultivation process relies on communicating with our donors, and staying in touch with your prospects through e-mails, newsletters and phone calls is key to turning new prospects into donors who write checks to our organizations on a regular basis.

What Does it Mean to Activate Your Prospects?

The process of “activating” your prospects is pretty simple. It means getting your prospects to say “yes” to actively supporting your non-profit in a way that does not involve writing a check or making a gift. Activating a prospect is getting someone to give you a small “yes,” or a series of small yesses, before the big yes of making a gift to your organization.

Some examples of ways you can activate a prospect include:

In truth, there are an almost unlimited number of ways you can activate a prospect, but all of them have one thing in common: they require your prospect to give up a little bit of time or energy if they say “yes.”

Why is it so important to try to activate your prospects (and particularly your major donor prospects)? Because active prospects are much more likely to give to your organization than passive prospects.

Let’s say you have two prospective donors that you are working with. You met them both at the same networking event. After meeting the first prospect, you followed up with a nice note, added her to your mailing list, and called her twice to give her updates on your organization.

For the second prospect, you did all of those things, but also got her involved on a committee studying your branding efforts. She’s come to the meetings and offered her input, as well as helped look at mock-ups on a new logo for your organization.

Which of the two prospects do you think is more likely to say “yes” when you ask her for a $1,000 gift to your non-profit? Hopefully both will say yes… but in my experience, the activated prospect is far more likely to give than the passive prospect, because the active prospect is already extremely invested in your work and feels like part of your team.

This week, think through your prospecting and cultivation programs, and see where your organization can start to activate your prospects and get them saying “yes” to your work, before you make an ask for a gift.