Are You Using the Hierarchy of Fundraising Asks? 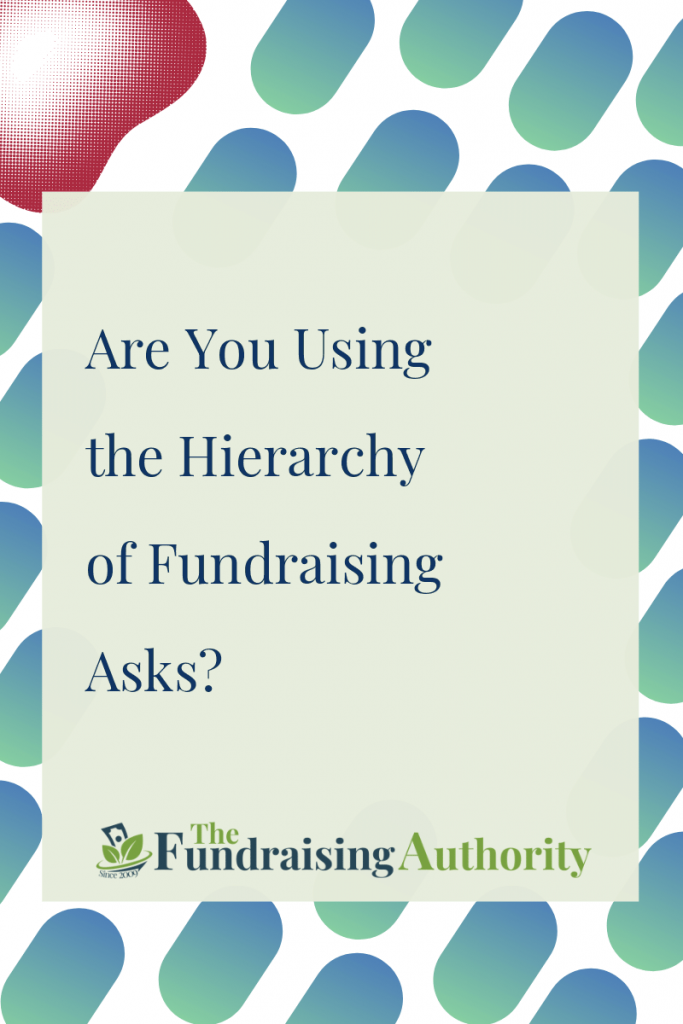 During presentations to non-profit groups, I often talk about the “2-Ask Process.” This is my concept that for every prospect you have at your organization, you should be prepared to approach them with two different asks, after you have properly cultivated them.

The first is an ask for money… you are asking them to make a gift to your organization. If they say yes, you steward them properly, and then at a later date, make a second ask. This ask is an ask for referrals… you are asking the person to open up their network to you and to serve as an ambassador for your organization by introducing you to others who might be interested in your work.

The 2-Ask Process is a good framework for approaching your individual fundraising program, and using it will put your non-profit ahead of the 99% of organizations that never ask their donors for referrals.

Once your non-profit is making asks for referrals, you’re ready for the real fun to begin… that’s when you’re ready to tackle the full hierarchy of fundraising asks. Did you know that there are a lot more types of asks you can and should making to your donors?

The Hierarchy of Fundraising Asks

Here is my complete hierarchy of fundraising asks that you should be making at your organization, in the order they should be asked. Not every ask will fit into your non-profit’s development strategy… that’s ok. In general, though, this is the order that you should be using as you approach your donors. In between each ask, of course, you should leave a sufficient amount of time for thanks, recognition, and stewardship:

The first and simplest ask you should make is to ask for a monetary gift for your organization. This is the donor’s opportunity to invest financially in your work. For more information on how to make a great ask, read How to Ask Anyone for Anything.

The second ask you should be making of your donors is to ask them for referrals. This means opening up their Rolodex to introduce you to people who might be interested in the work of your non-profit.

#3 – Asking for an Upgrade or Recurring Gift

The third ask you should be making of your donors is to ask them to either upgrade (by giving more this year than they did last year) or to make a commitment to monthly giving or another type of recurring gift. If you ask your donor for an upgrade and they say no, then try to get them to at least renew their gift by giving the same amount this year than they did last year.

#4 – Asking for a Planned Gift

A fourth ask that you should be making is asking your donors to make a planned gift to your non-profit by remembering your organization in their will (or through another planned giving vehicle, depending on how advanced your development process is).

This ask should only be made to donors who have demonstrated strong support for your non-profit through a multi-year series of gifts or pledges to your organization. For more information, read How to Launch Planned Giving at Your Non-Profit.

#5 – Asking for a Leadership Gift for a Campaign

Another advanced ask you can make of your donors is to ask them to make a large leadership gift to a fundraising campaign at your organization. This type of ask should only be made to donors who have demonstrated strong support for your non-profit by a series of gifts, and who have the financial capacity to make a large gift.

Is your non-profit using the entire hierarchy of fundraising asks as part of your individual giving program? If not, now is the time to start thinking through your current donors and prospects to see how you can make these types of asks in a systematic way.

For example, many non-profits will find and cultivate prospects and then, when the time is right, ask for a gift. Then, they set a goal of asking for referrals approximately 4-6 months after the donor makes the gift. They also set a process in place of asking for upgrades every year and new referrals every other year, and set up a meeting to solicit a planned gift after the donor makes his or her 4th gift to the organization.

The process looks different for every non-profit, and depends on the size of your staff and fundraising budget and the sophistication of your development program. The important thing is that you think through this hierarchy and see how you can be making different kinds of asks at your organization.

Of course, as part of your fundraising plan, you will also have lots of (what I call) “tactical asks.” These are asks that are made through mass-communication or as part of an individual fundraising tactic, such as asking for an event sponsorship or selling tickets to an event, mailing out your annual appeal or other direct mail letter, sending out an e-mail solicitation to your list, etc.

These tactical asks should be made in addition to the asks spelled out above. Thus, you should still be making an upgrade ask each year to your current donors, even if those donors will also be getting an invitation to your annual gala and a letter about your annual fundraising appeal. Be mindful of the timing of your asks, but remember that just because someone sponsors your event this year it doesn’t mean you shouldn’t be asking them for a planned giving commitment as well.