You Can Beg Your Board for New Names, or You Can Earn Them 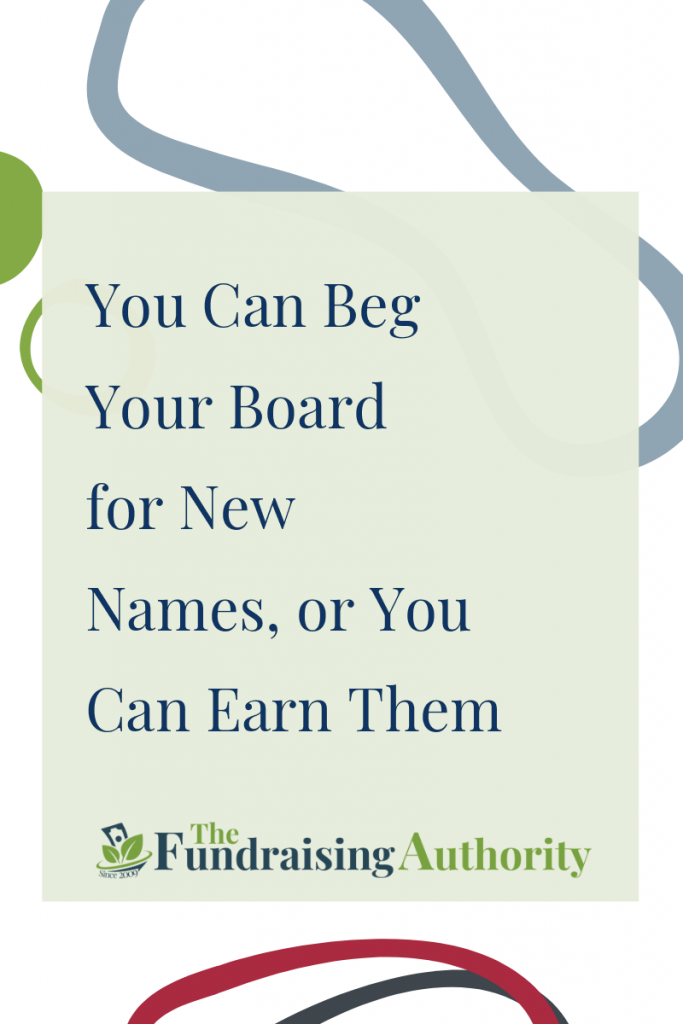 I can’t tell you how many times I have heard this plaintive cry from executive directors, development directors, and even board members themselves:

“If only our board would give us more names! I know they know more people… we need them to get us in to see their contacts!”

But let’s assume that you’re building networks and holding non-ask events, but one of the real weak spots in your fundraising really is the fact that your board members aren’t opening up their own personal networks to you. They have great contacts, but they’re not letting you get to them. What can you do?

This is probably what you’re doing already. I’d say a good 50% of every non-profit I have ever come across asks its board members for new fundraising leads several times per year, and the vast majority of those organizations are constantly frustrated by the lack of board response. So they start begging, and pleading…

“We just need three names from each board member!”

“Please help us meet our annual campaign goal. Use the sheet we are passing around to write down the two people you are willing to contact about the campaign.”

“Please forward your list of names for the event invitations no later than Friday. If you don’t, the board chair will call you relentlessly until she has them in her hands!”

This type of pleading gets old, fast. Sure, it can work. It won’t work well, but it can work. Your board members will probably throw you a couple of names here and there during these begging sessions, but it won’t be the tidal wave you are hoping for, and that you secretly know they are capable of.

Don’t you wish your board members came to you with new leads, instead of you having to beg them for contacts? This brings us to…

Option #2: You Can Earn Them

Your board members are, for the most part, normal, practical people. They are committed to your organization, but they are just as committed to the relationships they have with their friends, colleagues, family, and so on. To demonstrate the impact of these dual commitments on their willingness to put you in touch with their personal contacts, let’s take a look at two hypothetical scenarios.

How do you think your board members feel about leveraging their personal relationships for you at this point? I’ll tell you how they feel… Nervous. Protective. Wary. You’re so desperate you’re begging them, berating them to put you in touch people to receive a fundraising letter. Of course they are nervous, they’re worried you are going to do to their friends what you are doing to them – berating them, until they make a gift.

Now, let’s look at a second scenario. Your non-profit is holding a major event – for free – to announce a new initiative. The event is being attended by several Hollywood movie stars. As luck would have it, you were able to arrange for each board member to receive 5 free tickets to the event, right up front, with backstage passes for a meet and greet after the announcement, including pictures with the A list celebs. Would any of the board members like to participate, you ask?

How do you think your board members feel now? I’ll tell you – they’re excited. They’re already thinking who they can invite to the event. There’s one ticket for them, one for their spouse, and three extra for friends they want to impress. Darn! They have at least 10 people they would love to invite. Hands shoot up around the room… Board members want to know if there’s any way they can get more than five tickets?

This scenario might be over the top, but it proves a point – your board members do have more contacts, and they cherish the relationships they have with those contacts (rightly so). If your organization does something to earn your way into that relationship, in a way that feels right, is compelling, and shows that you can be trusted with the gift of an introduction, then your board members will make that introduction and let you into their network.

Of course, most non-profits won’t be able to bring in celebrity guests for their next free event, but I guarantee you that every non-profit can earn their way into their board’s network without having to beg and plead, by holding great non-ask events, putting on seminars and shows, publishing unique reports and books, offering compelling “in the trenches” experiences and hands-on philanthropy, pioneering new methods, and probably several hundred other ways.

What can your non-profit do to earn more names from your board this year?