Case Study: How One Non-Profit Turned Their Fundraising Around Through Better Planning 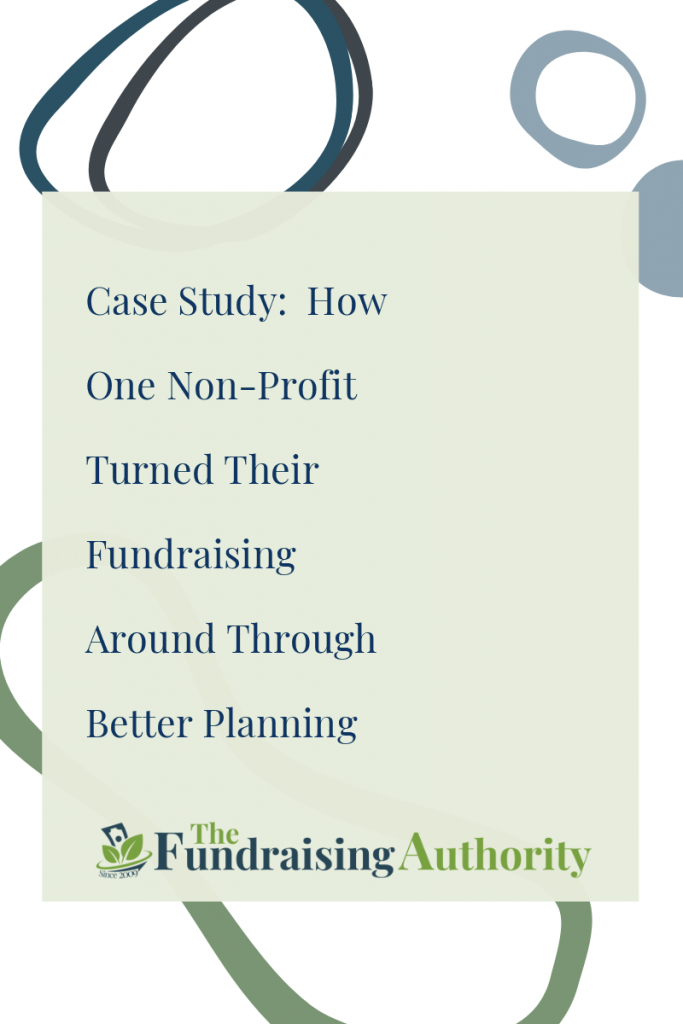 Several years ago, I had the opportunity to work with a mid-sized non-profit that was struggling mightily to raise money. The organization had been around for several years, and like many non-profits in the post-startup phase, had gotten big enough to be adding staff and services for clients, but was still small enough that there was no full-time development director.

When I sat down with the Executive Director and Board Chairwoman, it was clear that this organization had big plans, but no clue how to raise the revenue to get there. This fact was clear from their answer to the first question I asked…

Me: “Can I see your fundraising plan?”

Me: “Can I see the written plan for how you plan to do that?”

Instead of a written (or even an “in our head only”) fundraising plan, this non-profit simply jumped at every fundraising opportunity that came across their desks.

Story in the paper about a similar organization getting a grant? Let’s drop everything and spend the rest of the week writing a grant proposal for that same foundation!

Board member has an idea for a new fundraising event? Great! Let’s hold it next month. I’ll get an invitation list together today.

Executive Director realizes the organization hasn’t sent out a fundraising letter yet this year? Let’s send one out on Friday!

The non-profit had spent two years operating this way… jumping from task to task, idea to idea, raising money in bits and pieces here and there. Thus far, they had managed to stay afloat, but had not been able to break away from living hand to mouth, fundraising receipt to fundraising receipt.

When I ask why, they generally tell me that it is because developing a fundraising plan would take too much time… or that they would need to spend a ton of money bringing in a consultant to write the plan for them.

First, we gathered all of the key stakeholders at the non-profit across several different meetings, including board members, key donors, staff, and other supporters. At these meetings, we discussed where the organization was headed, what types of fundraising these supporters would be willing to help us do, and where these folks saw opportunities for further growth in our efforts.

The organization developed a budget for what they wanted to spend on programs and overhead, and we used that as a guide for how much we needed to raise.

Third, the staff and I took a close look at the organization’s past fundraising efforts. They had some huge financial successes, and a couple of big blunders. What had worked in the past? What didn’t work? What could have worked if it had been done a little differently?

Due to the limited resources at this organization, we decided to use this fundraising calendar as the “meat” of our fundraising plan, rather than writing out a 45 page narrative.

Once the plan was completed, the final step was to get buy-in from everyone who had a stake in its success.

First, we held a meeting with the staff (including the program staff) to explain the plan and what we needed from each staff member. Then, we met presented the plan at a board meeting and had the board vote to officially approve the plan. Finally, we took the plan back to the donors we consulted in step 1 and showed them the finished product and asked them to get on board and help us expand our fundraising network.

Ultimately, the plan was a huge success. The organization, which had been shifting aimlessly from tactic to tactic in years past instead followed the plan, and by year two had become so successful that they were able to hire a full time development director as well as attract several major multi-year gifts through the tactics laid out in the fundraising plan we developed.