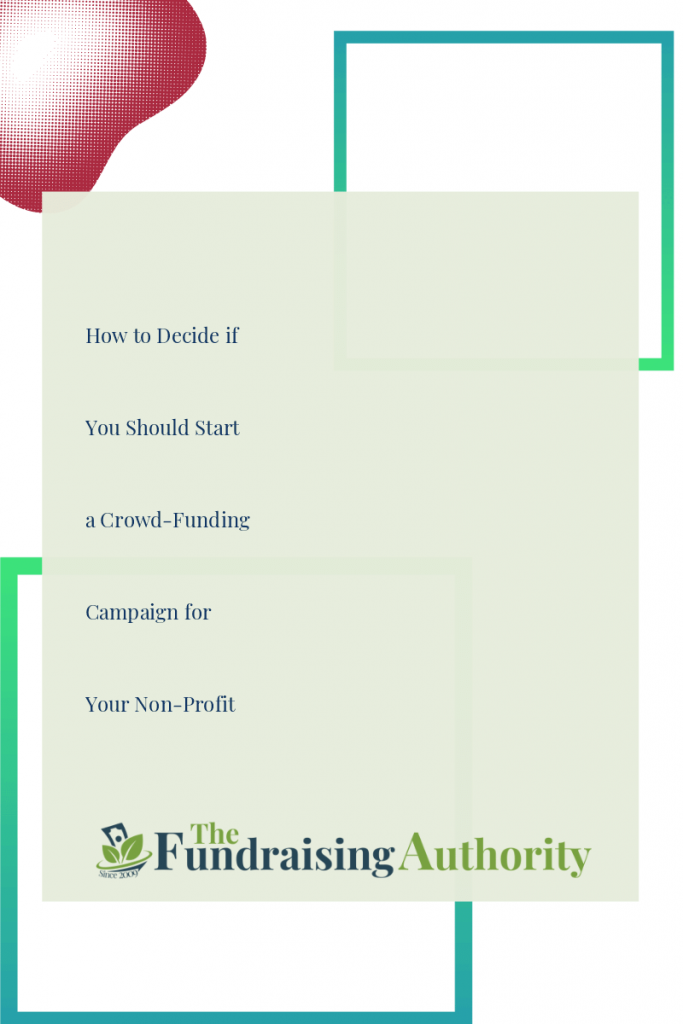 Fundraising professionals are scratching their heads over the meteoric success of many crowdfunding campaigns: How is it possible to raise thousands of dollars in just one day?

It seems as likely as federal counterterrorism agent singlehandedly hunting down and disarming nuclear weapons in 24 hours (read: only on TV).

But it does happen, and quite often – and not just for creative projects like the film adaptation of Donald Miller’s Blue Like Jazz, which raised over $300,000 in 31 days (the campaign even exceeded their first goal of $125,000). One nonprofit raised over $23,000 in a day.

There’s no secret sauce that will guarantee results like the ones previously mentioned but successful crowdfunders do have certain things going for them, like knowing when to crowdfund and when to take a different approach.

Nonprofit crowdfunding is not a one-size-fits-all fundraising solution.

In the same way you wouldn’t take an antibiotic for the flu (because the flu is caused by a virus, and antibiotics kill bacteria), not every online fundraising campaign will be a crowdfunding campaign.

So when is a good time to crowdfund and when isn’t it? Here’s a short list of factors to help you decide.

The Adventure Project’s goal was to raise funds to fix broken hand-pumps and to train technicians who will maintain and repair handpumps moving forward.

Notice that the goal wasn’t to provide access to clean water, which, while noble, is ambiguous. Donors need an assurance that their gifts will make an impact.

Would a single donation make a dent in providing access in clean water? Hard to say. Could it fix a well that provides clean water for one village? Probably.

Goals that are vague and lofty might intimidate people from joining; on the other hand, bring them down to earth, and donors are more likely to believe they’re making a difference.

If you’re looking to bolster your nonprofit’s general fund, crowdfunding is not the right fit for you. Supporting the overall operations of an entire organization is too broad (see above); it’s a marathon effort, and crowdfunding is more like a sprint.

Nonprofit crowdfunding campaigns work best when they run for a set period, which could range from one day to three months.

Setting a deadline creates a sense of urgency, and for better or worse, plays up to the fear of missing out — as in, if I want to be a part of this, I need to do it now. Knowing that there’s an end in sight encourages would-be donors to join the crowd.

Isn’t it ironic how trying to get everyone’s attention will get you none?

Focus your efforts on a particular group of people, not the entire crowd. If your campaign is to build a school in a developing nation, you might focus on recruiting teachers and others who are passionate about education. These folks will then recruit their friends and family, who may not necessarily be as hyped up about the issues, but will care because it matters to them.

It’s okay to start with a small crowd because eventually, these people will help you build community by inviting others to join them.

Being asked to give a large sum of money can be intimidating, and since we live in a “all-or-nothing” culture, you may end up getting no responses to your request.

Let’s suppose your organization wants to provide post-secondary education scholarships to needy but talented students. On my own, I can’t cover someone through a year of college, and feeling incapable of helping would make me withdraw. But if you told me, “$25 covers the cost of books for one semester for one student,” I’d be more likely give.

Show where the money’s going by breaking down the campaign into smaller parts: stages of a building project, or cost of summer camp for one student (does this cover food, lodging, activities?), or the number of stoves provided.

This is how you can lower, even eliminate, any perceived barriers to participating. If you’re having a hard time doing this, however, it’s a sign that crowdfunding is not the best fit for your campaign.

In short, if your fundraising campaign is well-defined — in scope, time, audience, and impact — then crowdfunding will be a good fit. Otherwise, in our humble opinion, crowdfunding is probably not the right fundraising prescription for your campaign.

Sara Choe is a crowdfunding expert at CauseVox, a fundraising platform focused on crowdfunding for nonprofits. They’ve helped thousands of people raise millions of dollars via crowdfunding.