What to Do When a Major Donor Prospect Says No 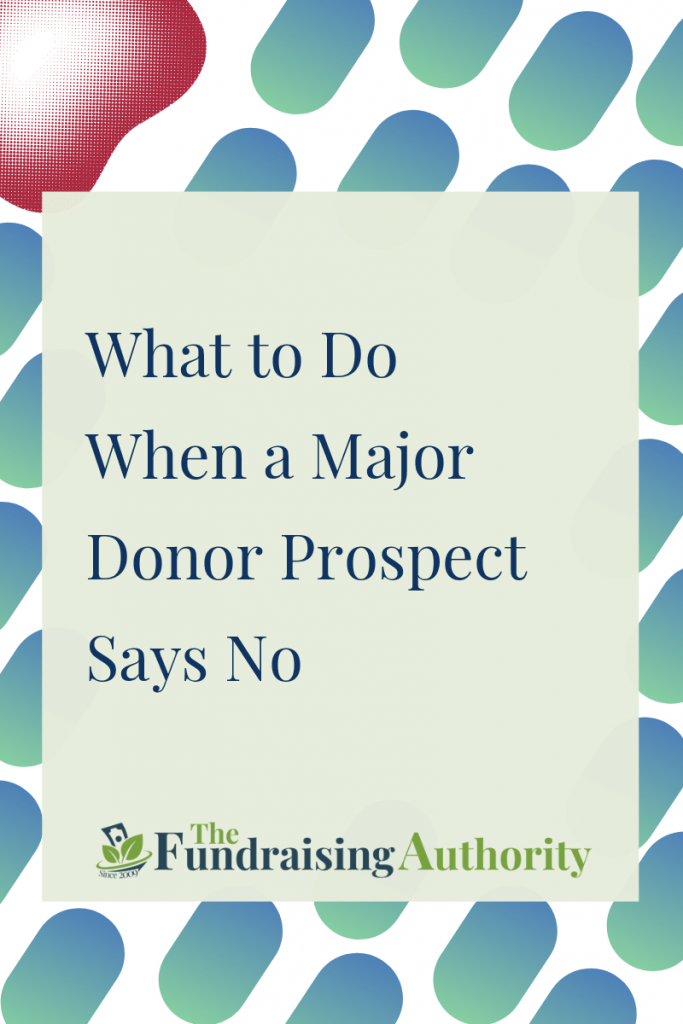 Is there any more depressing word in the fundraiser’s lexicon than “no”? It means all of your efforts, research, and cultivation will not be resulting in a gift from this prospect. Often, it means explaining to your boss, or to a referring board member, that no, you were not able to secure a donation, and no, the donor does not want to think about it… they outright declined.

That being said, “no’s” happen. Hopefully not often, but they do happen. The next time a major donor prospect says no to you, or to someone at your organization, take the time to think through the following questions to see what you can learn and how you should follow up with this prospect:

Did You Properly Cultivate the Prospect?

The number one reason why major donor prospects say no to an ask is that they haven’t been properly cultivated. Generally, for large asks, you want to walk into an ask with a pretty good hunch that the person will say yes. This hunch should be based on a history of conversations between yourself and the prospect, during which he or she has indicated support for the organization.

Furthermore, your prospect should have taken at least one step, if not more, to becoming part of your “team.” This means that the prospect has attended an event (either fundraising or non-ask), has joined a committee or board, has volunteered at your organization, has offered your staff advice, or has taken some other proactive step to becoming more closely involved with your non-profit

The prospect should also know that you are getting ready to make an ask, and be familiar with the project or program for which you are seeking support. Your cultivation activities should also have indicated that this potential donor has the financial capacity to give at the level you are asking, and over the term you are suggesting.

For more on donor cultivation, read 10 Ways to Supersize Your Donor Cultivation Efforts.

If you realize, after the ask, that you did not properly cultivate the prospect, fear not! All is not lost. Send the prospect a handwritten note thanking them for their time, then go back to them in a couple of weeks to ask them for their advice on one or two items with your organization. Get them involved on a committee. Get them on your team, doing something with you other than making a financial gift. Re-start the cultivation process, and eventually, you will be able to make another ask.

Did You Properly Craft Your Ask?

The second most common reason why major donor prospects say no is that the ask was not properly crafted.

When making an ask, you should be sure that the person who has developed the relationship with the prospect either makes the ask or is present at the ask. This means that if a major gift officer has been cultivating the prospect, who has only met the Executive Director once, the major gift officer should either make the ask or accompany the Executive Director when he or she makes the ask.

Similarly, you should be making the ask for a program or project that the prospect has indicated some interest in, wherever possible, as well as asking for a gift that is within the range of possibility, given the prospect’s financial situation.

Finally, be sure that when making the ask you (a) ask for a specific amount, (b) explain what the money is needed for / will be used for, (c) and make an emotional connection between the donation and your non-profit’s mission.

For more on making great asks, read How to Ask Anyone for Anything.

If you realize in hindsight that your ask was crafted poorly, fear not! Try to get the prospect re-engaged in the cultivation process, and go back to them with an ask once you sense that they are ready to take the next step.

Why Else Did the Prospect Say No?

What if you properly cultivated the donor, and properly crafted the ask, and they still say no? In that case, it usually means that one of your assumptions about the donor are incorrect.

Whatever the reason for the no, the person making the ask should (gently and with as much tact as possible) try to figure out what the reason is before the meeting is over, by talking about it with the prospect. This will allow your organization to know whether or not there is something you can do to change the donor’s mind, as well as whether you should continue to cultivate the prospect or move on to greener pastures.

No matter what the outcome, don’t give up! No’s are a part of non-profit fundraising. Analyze them, learn from them, and then get back on your horse and get out there making another ask!