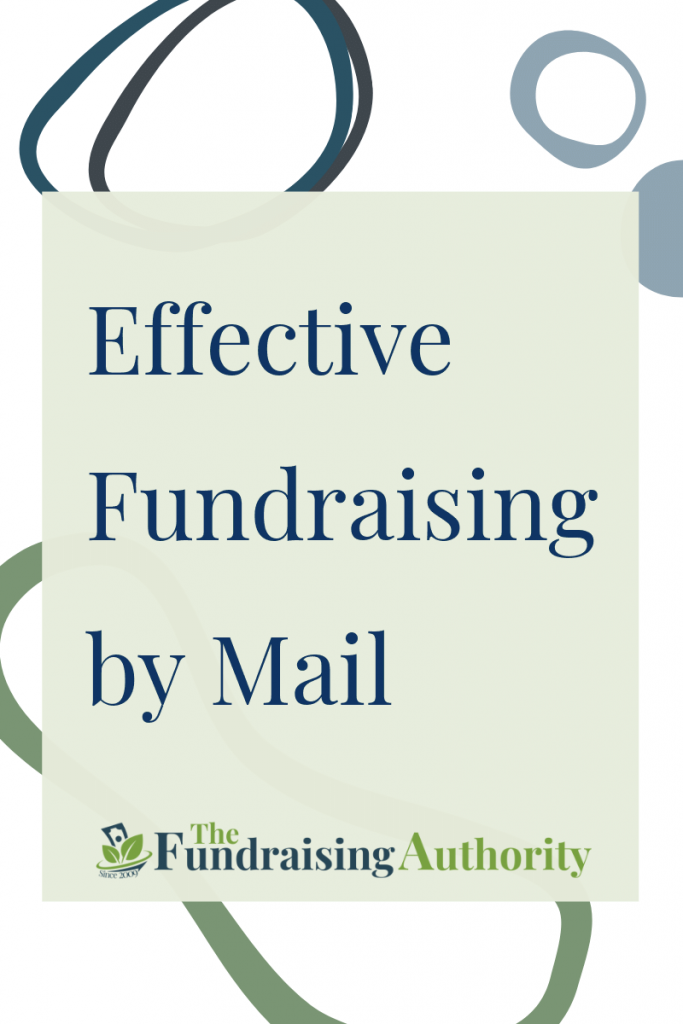 To many organizations, fundraising through the mail seems like the end-all, be-all tactic. It’s a way to raise money without having to ask in person (or over the phone), it seems cheap (how much is a stamp these days?), and it’s a rinse and repeat formula, that can be utilized week after week, or month after month.

The reality is that real, effective fundraising through direct mail is hard (but rewarding) work. Direct mail is one of my favorite fundraising methods, and it should be a part of your arsenal. But know this: much of direct mail fundraising is a science. Development professionals have been raising money through the mail for the past half century, and they know what works, and what doesn’t… so be sure to read up and learn the science of fundraising mail. Remember, direct mail is actually pretty expensive (all of those envelopes and stamps add up), so make sure that you are investing wisely.

One important concept that you need to learn before you start writing letters is the difference between housefile and prospecting mail. Housefile mail is mail sent to your own organization’s list of past donors. These donors have already contributed to your group, so they are likely to give again. Remember, the first rule in direct mail fundraising is this: Past behavior is the best predictor of future behavior. Meaning…. If someone gives to your organization, they are likely to give again. If they don’t give, they are unlikely to do so in the future.

Prospecting mail is mail sent to a list of people and companies who have not previously given to your school, church, or charity. This list of “prospects” might be one that you borrowed from a fellow non-profit, that you purchased from a list broker, or that you compiled on your own.

While housefile mailings will often be very profitable, and will see returns in the 5-15% range (meaning that with a good housefile list and a well-written letter, you can often expect to see 5-15% of the people who receive the letter sending back in donations), with prospecting letters, your goal is simply to break even (meaning that you make back in donations as much money as you spent in sending out the mailing). Response rates for well-written prospecting letters, even to good lists, often hover in the .5-1.5% range.

What is the secret of writing great fundraising letters that have good response rates? Really, there are two:

The first is – be compelling and emotional. Remember – your organization, and your mission, matters! Why does your organization matter? Figure it out, then tell people… tell people stories that tug on the heart strings, that make them cry. In fundraising letters, people don’t want to hear a list of boring statistics and facts. Sure, one or two surprising or super-compelling facts might make all the difference. But a lost of twelve percentages with footnotes supporting them? Not compelling.

Instead, tell stories, use charts, make people cry. Think: if I had 30 seconds to tell someone about my non-profit, and the success of our group depended on that one person writing a check on the spot… what would I say? Then write that pitch as your first draft.

The second secret is: write in such a way that your compelling content gets read. People are busy. Even if they aren’t really busy, most people think they are. Very few people think they have the time to read through your fundraising letter. Most people will skim your letter to see if it is worth reading. Where do they look to make their decisions? The first sentence, the pictures and charts (with their captions), the headlines and bolded or underlined words, and the P.S. That’s it… just 20-30 second of skimming.

How do you capitalize on this tendency? First, give them lots to skim. Use section headlines, a great opening sentence and P.S., pictures and pull-quotes, and bolded/underlined words. Then, make sure that all of this “skim-able” content works together to tell the entire story of your letter. Ask yourself: if someone only skimmed my letter, using the items listed above, would they know what I am saying? Would they “get” the whole story?

O.K., so you’ve sent out (“dropped,” in direct mail parlance) some great prospecting letters, and have started to build a good housefile list. Now what?

The key to keeping a housefile list fresh is to stay in touch with your donors. You can send out housefile fundraising letters, to be sure… but don’t overdo it. 3-4 housefile letters a year is probably all that your list can support (or accept). Keep them interested, and in the loop, by sending out occasional “non-fundraising” pieces… newsletters, postcards, e-updates, and of course, thank you notes each time they give. Stay in touch, and make your supporters truly feel like part of your team.