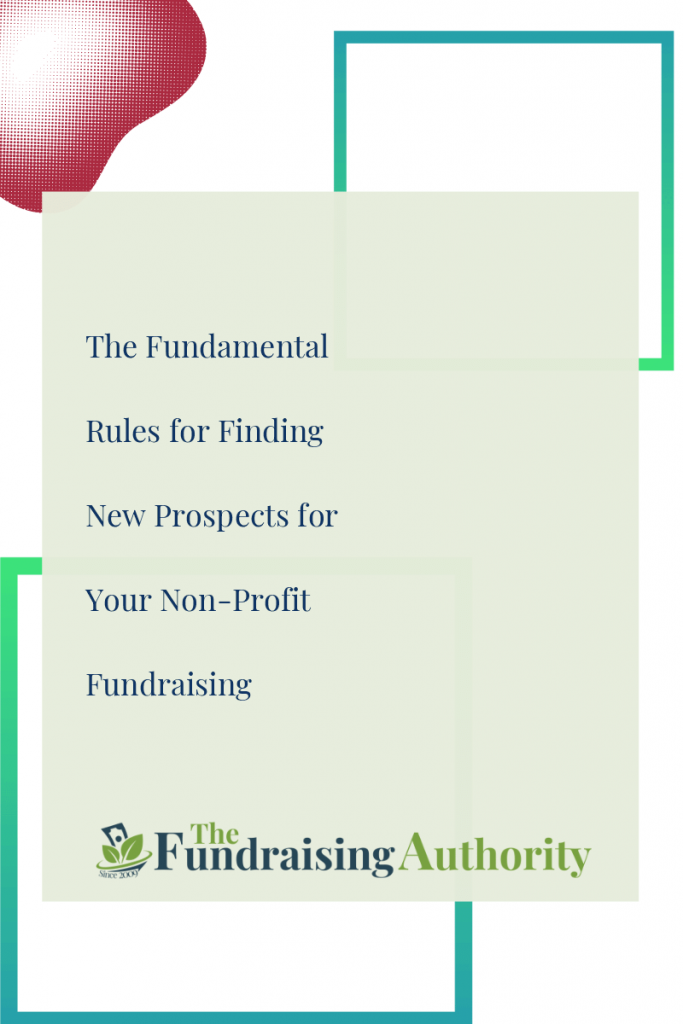 Prospects are the lifeblood of non-profit fundraising. Without a regular stream of new prospects, organizations can’t cultivate, can’t ask, can’t steward. Our non-profits need new prospects in order to thrive.

There are several fundamental rules of prospecting that will help you understand and engage new prospects for your fundraising program:

Rule #1: People Give Based on Relationships

Some people give because of interpersonal relationships: they know and trust someone on your board, or one of your volunteers, or someone that you helped. Their relationship with that person (and that person’s positive recommendation of your non-profit), encourages them to make a gift.

Either way, a relationship must exist or be built before a check will be written.

Having read Rule #1, many non-profits may think, “great! I’ll just tell my board and volunteers that they have to get all of their friends to write checks. They can just go through their rolodex and tell people, ‘I need you to write a $1,000 check.’” This is called “strong-arming your rolodex,” and it doesn’t really work.

Sure, you can raise money this way, at least for a time. Your board and supporters can call in favors from friends and colleagues and make it a point of personal friendship or professional association for donors to give to your group. And some of those people will in fact give. Once. But it’s not sustainable, and doesn’t generate the huge returns that can be had by relationship-based prospecting.

Instead of asking your board to strong-arm their contacts into making a donation, ask your board to invite three people they think may be interested in your non-profit to a non-ask event or a tour of your facility… or ask them out to lunch with the Executive Director… or get them involved in a volunteer activity. This slow-but-steady approach to prospecting builds long-term donors who give more money, year in and year out, than the one-time gifts that can be had through strong-arming your board’s rolodexes.

No matter how you come across a prospect – whether that person is a former client of your agency, a patient at your hospital, a friend of your board chair, or simply a businessperson with a heart for your particular issue, know that mission matters to your prospects.

Rule #4: Prospecting is a Deliberate Process

Prospecting should be a deliberate process. Far too many non-profits prospect without any real strategy or plan. This leads to haphazard prospecting at best, and a disorganized and ineffective fundraising organization at worst.

Have a written prospecting plan. What are your prospect profiles (who is likely to give to your organization)? Where can you find those people? How can you reach them?

How many newsletters does your non-profit send out? How many non-ask events do you have? How many tours do you offer of your facilities per month? How often do you provide volunteer opportunities? The more often you “ship” things out into the world, the more prospects will seek you out.

For example, over the course of one year, one non-profit I know went from shipping almost nothing to offering quarterly facility tours, monthly e-newsletters and press releases, and renewed focus on volunteer activities, which were heavily publicized. As they implemented this plan to ship more out into the world, they not only generated additional buzz among their own supporters and friends, but they started to have new prospects approach them, simply because the prospect had heard about all of the good work the non-profit was doing.