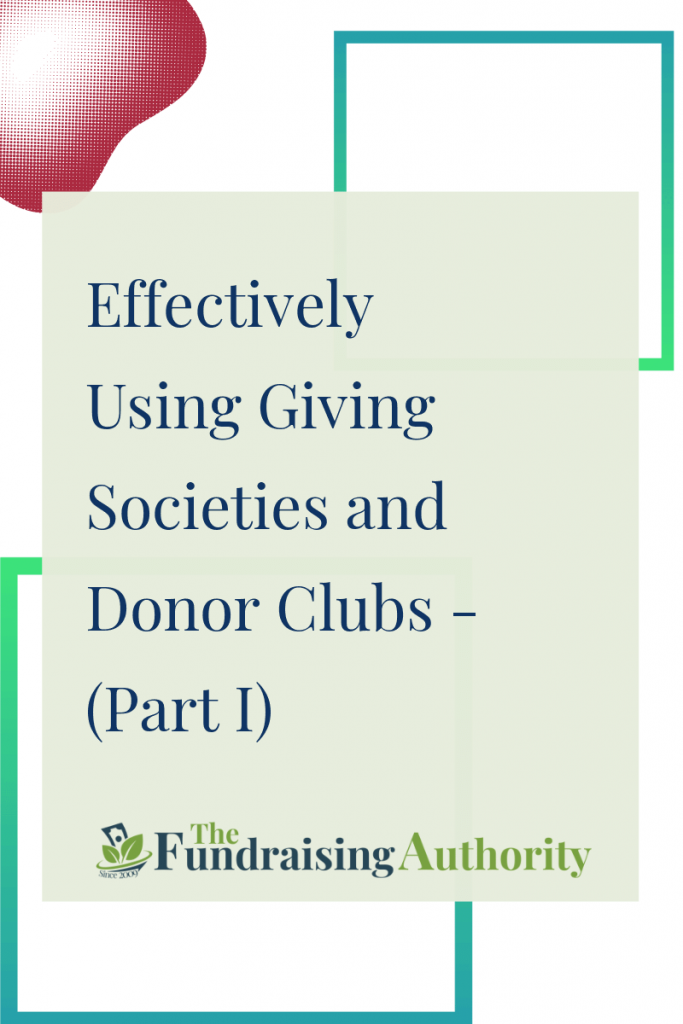 Today we are starting a new two-part series on how to effectively use giving societies and donor clubs at your non-profit.  In this article, we’re going to look at what these groups are and how they should (and shouldn’t) be used.  In Part II, we’ll look at how to set up successful giving societies at your organization.

What are Giving Societies and Donor Clubs?

Giving societies and donor clubs are groups set up by a non-profit to help cultivate and steward donors, keep them loyal to the organization, and encourage them to give more (and larger) gifts in the future.  Generally, non-profits set up various groups at different giving levels, and offer corresponding benefits to group members.

For example, a legal aid society may set up three groups, The Advocates, The Defenders, and The Friends, and offer membership to donors who give at least $25,000, $10,000 and $2,000 respectively.  In return, donors get benefits like access to special events, newsletters, lapel pins, etc., with donors at higher levels getting larger benefits.

Please note that we can use the terms “giving society” and “donor club” interchangeably, they both generally refer to the same types of groups.

Giving and benefit levels for donor clubs will vary depending on the organization (e.g. at one organization, a $25,000 donor may qualify as one of the charity’s top donors, while at another non-profit that might barely be considered a “major gift”).  All non-profits are different.

Types of Societies and Clubs

There are many different types of giving societies that a non-profit can set up, based on its needs.  Some of the most common types of groups include:

– Annual Giving Clubs:  Groups comprised of those who make a qualifying-level donation each and every year

– Legacy Societies:  Donor club for those who have pledged a bequest or planned gift to the non-profit

– Young Professionals Groups:  Focused on those under a certain age who have given a certain amount to the organization

– Affinity Groups:  Donor clubs focused on supporters who share one or more “affinities” or traits, such as geographical region, occupation, age, hobby, etc.

Why These Groups Work

The benefits you offer to your donor club members show them that you appreciate them and that their support matters.  Furthermore, the regular communications you send out and events you hold with your society members strengthens that bond and creates the sense that this is “our” organization, one that club members are proud to support and help “lead.”

Finally, giving clubs help systematize your donor funnel and provide order to the chaotic world of donor cultivation.  Giving clubs with various levels and benefit plans force you to think through the donor experience and place it on a schedule, which helps reduce fundraising stress for staff and donors alike.

Now that we know what giving societies and donor clubs are, and why they work, let’s briefly look at a few fundamental do’s and don’ts for utilizing them at your non-profit:

While donor clubs are a great way to provide structure to your fundraising efforts, remember that every donor is different and that each will require differing amounts of contact and hand-holding.  Don’t let donor clubs prevent you from treating your supporters like real, individual people.

Some non-profits make the mistake of thinking that once someone is a member of a giving club, they will continue to give year in, year out, no matter what you do.  Nothing could be further from the truth.  Your donors aren’t ATMs.  They are people.  They require relationship-building and stewardship.

Many non-profits launching giving societies think they have to have 3, 4, or more clubs / levels right out of the gate.  You don’t – there’s nothing wrong with launching your program with just one group / level.  In fact, it is usually the smart way to dip your toes into the water.  Consider launching just one group next year, and see where it goes from there.

A few organizations offer “lifetime membership” options for joining their giving societies (e.g. one non-profit I know has a $5,000+ per year minimum for one of its clubs, but for $50,000 you get lifetime membership).  I don’t like lifetime memberships because they encourage “one and done” philanthropy, where a person will give once and likely never give again, and will do so in good conscience because they are a lifetime member of your giving club.  I much prefer ongoing (and on-growing) relationships with my donors.

Be sure to read Part II of this series, where we look at the steps you need to take to successfully launch giving societies and donor clubs at your organization.