Are You Stewarding Your Donors? 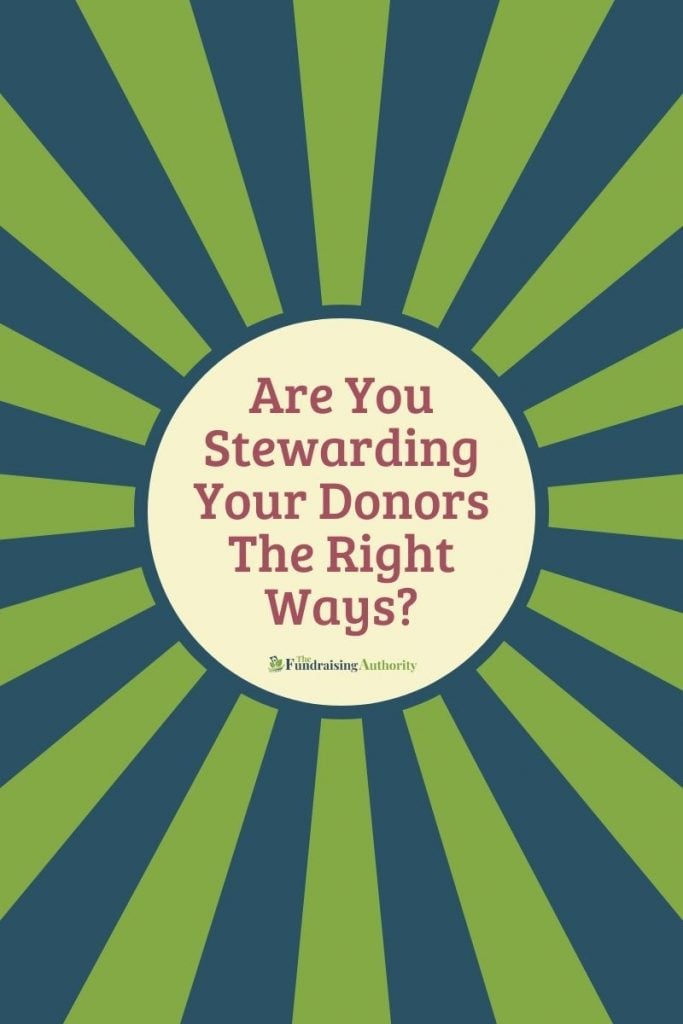 A few weeks ago, I wrote an article called Prospect. Cultivate. Ask. that detailed the process of moving new prospects from investigating your non-profit to investing in your mission. An astute reader e-mailed me after the article was published to remind me that I forgot one important piece of the puzzle: stewarding donors after they give.

Now, like most non-profits, I know about stewarding donors. Yet when I was writing that article, it was an afterthought, just like it is for far too many charitable organizations, though it shouldn’t be.

Before going on, let’s answer the question, “What does it mean to ‘steward’ a donor?” Simply put, stewarding a donor is what a non-profit does (or should be doing) from the time of the first gift, and lasting until that donor no longer has a relationship with the organization.

Stewarding after a donation is like cultivating before a donation: it is a process by which the organization develops an ever-stronger relationship with the donor, and involves constant communication to deepen the relationship.

One important note: you cannot steward a corporation or a foundation. You can only steward a person. Sure, corporations and foundations can be donors to your organization, but the real way to steward that relationship is to develop deeper connections with the person or persons who serve as your primary contacts and advocates at those places… meaning that you’re really always stewarding relationships with people, even if it is a corporation or foundation who is writing the actual checks.

Stewardship can NOT be an Afterthought!

For far too many non-profits, donor stewardship is an afterthought. That’s a big mistake. In the world of for-profit sales, there’s a saying that “your best customers are your current customers.” This means that if someone buys from you once, it is far more likely that they will buy from you again. It costs a lot more money to sell to a new prospect (to find… cultivate… and sell that prospect) than it does to sell a new product (or an upgrade) to a current customer.

How to Steward—the Right Way

The only way to truly steward your donors is to draw them into a deeper relationship with your organization. Deep relationships require a give and take, and a greater association than simply writing checks. Here are some ways your non-profit can steward its donors by building greater connections with them:

Get Them Involved – Donors tend to stay connected with organizations that engage their minds, hearts, and bodies in addition to their wallets. Ask your donors to volunteer, to serve on committees, to join your board. Get them moving on behalf of your charity with participatory fundraising. Get them involved.

Ask Them What They Think – When was the last time you asked your donors for suggestions on what you could be doing better? Have you held a donor roundtable or formed a donor mastermind group? Call your donors… ask them for suggestions. Engage them. Show them you care what they think and respect their suggestions and concerns.

Promote Their Generosity – If you have a gift or a donor that is open to public attention, give it to them. You can give them an award, recognize them at an event, profile them in a newsletter, etc.

One great way to put a spotlight on donors is by using a Google Ad Grant. Identify keywords related to your donor – their names, employer, their school, or club – make sure it is a narrow target. Place an ad that says “Acme Nonprofit Thanks John & Jane Doe for their invaluable support and friendship.”

Let the ad run, your narrow keyword targeting means it won’t get expensive. They will start to hear from friends and acquaintances, and they will feel like you truly care about their support.

Want to learn more about how to steward your donors? Read The Non-Profit Fundraising Formula.