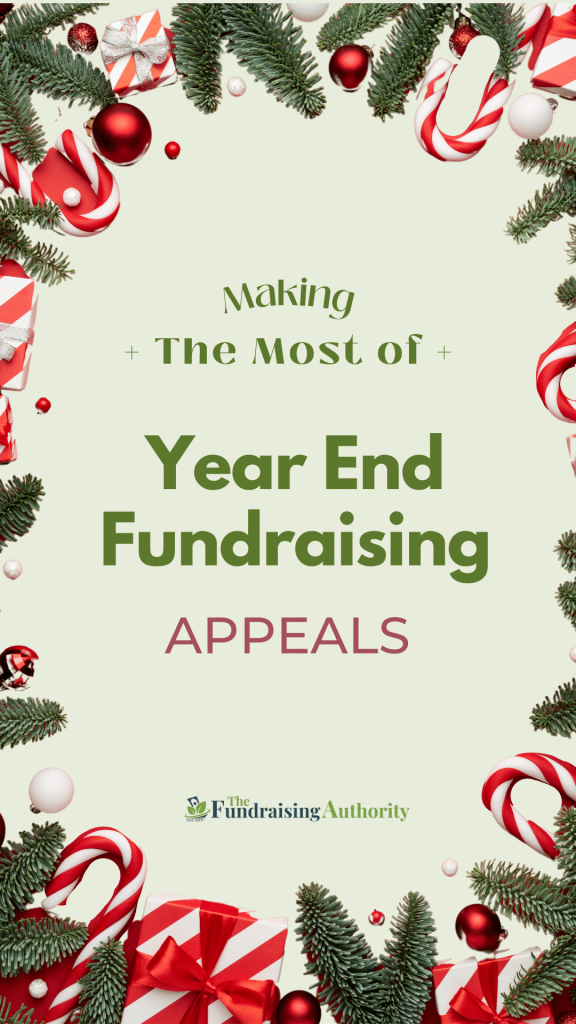 Today, we’re presenting some tips for maximizing your non-profit’s revenue from year end appeals. We’ll start with the basics, and then move on to the advanced tactics.

The Basics of Year-End Fundraising

For non-profits, the result of all of this is very simple: if you aren’t making year end fundraising appeals, you are missing out on a potentially large pool of fundraising revenue. Every non-profit, no matter how small or large, should be reaching out at the end of the year.

Generally, you’ll want to stick with your current donors at the end of the year – meaning that, for most organizations, your year-end appeals should be going to current donors, asking them to up their gift or to give again one last time before the year is out.

When planning year end appeals, your goal should be to make an ask (through a letter, call, or other means) to every single current donor – you never know who has money left over at the end of the year to give, so my suggestion is that you try to make sure that every donor gets at least one fundraising communication, or perhaps more (e.g. an e-mail and a piece of direct mail) with your year-end ask.

I have found that diversifying my year-end appeals maximize revenue. Here’s a simple year-end fundraising strategy that I have seen work time and again at small and medium-sized non-profits:

1. First, send out a year-end fundraising direct mail piece to your entire housefile (your entire donor database) asking for gifts.

2. Second, send out a year-end e-mail solicitation to your entire e-mail list, asking for gifts (and tied, thematically, to the direct mail piece). A week later, follow up with another e-mail to all of those on your list who did not open the first e-mail (this is possible with e-mail list servers such as Constant Contact or AWeber). Depending on your tolerance for repeat solicitations, you can also send out a third and final e-mail to the entire list (whether they opened the other e-mails or not) making one last pitch.

3. Finally, have your team (staff and board, or simply staff) make follow up calls to some percentage of the donors who received your letters. You could decide to call only those donors above a certain giving level, or, you could do my favorite: divide your donors into three groups, and call 1/3 of them each year – that way, donors don’t get tired of your year-end fundraising calls or grow to avoid you at the end of the year.

Segment and Vary Your End-Of-Year Appeals

You’ll never run out of opportunities to raise money at year end if you segment your fundraising appeals by donor type, donor status, and date last gift. You can even segment your mailings by recipient type, giving your supporters the option to receive emails or letters.

Donors can serve as your primary supporters, but you might also include volunteers, members, and donors who attend events as secondary supporters.

Segment your list by donor type so that you can send the most targeted letter to each group.

You can also segment your list by donor status, which allows you to send a different letter to donors who haven’t made a contribution in a long time.

Finally, you can segment your list by date last gift.

This way, you can send a different letter to recent givers, lapsed givers, and donors who haven’t given in a while.

Your nonprofit should definitely consider using social media to raise funds during the year-end fundraising season. You’ll find lots of nonprofits doing this already, and there are plenty of reasons why you should too. Here are four big ones:

1. Raise Awareness – Posting year-end appeals on social media helps spread the word about your organization and its mission. People who might not otherwise hear about your cause will now be exposed to your appeal.

2. Boost Donations – Many donors prefer to give at the end of the year rather than waiting until January 1st rolls around. By sharing your year-end appeals on your social media channels, you’ll encourage those same donors to donate sooner rather than later.

3. Increase Engagement – Sharing year-end appeals on Facebook and Twitter encourages engagement among your supporters. Those who receive your appeal may comment on it, share it, or even start conversations with others about your cause.

This year-end fundraising postcard is perfect for getting your donors excited about giving at the last minute. It’s a great way to catch their attention and remind them of your organization’s mission.

Use bright imagery, a high quality photo or two, and professional-grade card stock to make your postcard appealing. Don’t forget to prominently display the URL or QR code to your online donation form so your donors don’t miss it!##

You should definitely include a call to action in your year-end fundraising appeal. A clear call to action is key to increasing conversions and making your donor feel confident about donating. Include links to your online donation form, text-to-give number, or social media handles where your supporters can donate directly.

Don’t forget to mention any special deadlines or campaigns happening during the holiday season. This will encourage your donors to give early to avoid missing out on those opportunities.