Developing a Tactical Fundraising Calendar for Your Organization 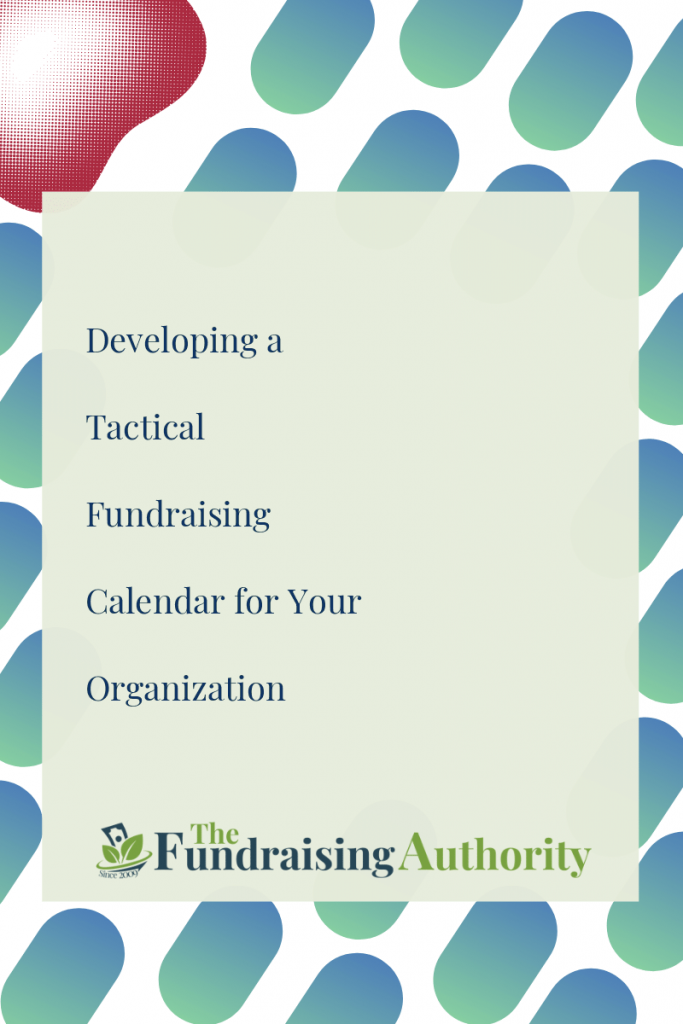 The tactical strategy for your fundraising should not be random, and it shouldn’t be based on a “we’ll figure this out as we go along” mentality. Your best bet to ensure maximum revenue is to lay out a tactical fundraising calendar as part of your overall fundraising plan.

A tactical calendar, as its name suggests, is simply a calendar that shows when your non-profit will employ each of the fundraising tactics it is planning to use in a given year. Every standard fundraising tactic, with the exception of your ongoing personal asks, should be listed on your calendar. For example, at a small organization, your tactical calendar may look something like this:

August – Hold one hosted fundraising event at the beach.

So, how should you determine your fundraising calendar? Let’s talk about a couple of key fundraising principles that we’ll need to remember for this process:

The first thing to remember is not to ask the same donors to give too often. If a donor is constantly receiving direct mail solicitations, e-mail asks, fundraising event invitations, as well as visits from your development director, he or she is going to feel overwhelmed and put-off. Be careful how many times per year you are asking each donor for money.

Remember, though, that you will likely target different donors with different solicitations. Let’s say you want to limit the number of times each donor is asked for money to four times per year. Does this mean you can only use four fundraising tactics at your organization annually? Of course not! While you may use some fundraising tactics that utilize an ask to your entire database (e.g. an annual fund appeal), you will also want to use some tactics that are targeted to different groups (e.g. a capital campaign ask to large donors, but not smaller donors, prospecting mail to new donors, but not current donors, a low dollar e-mail solicitation to smaller-level donors, but not mid- and high-level givers).

On the other side of the coin, be sure that you don’t ask for money too rarely. If donors never hear from you other than the occasional e-mail update, they won’t think you need the money, and will start giving elsewhere. Asking for money regularly keeps your organization’s financial needs front and center for the donor, even during those solicitations where they choose not to give.

So… just how rarely is too rarely? While the answer will vary for different organizations and for different donors, as a general rule of thumb, unless a donor has told you otherwise, don’t ask your donors for money fewer than twice per year. Of course, if a donor tells you they will make an annual gift to your major fundraising event, but requests that you not make asks of them at any other time of the year, honor that request!

In my estimation, the best way to determine your fundraising tactical calendar is to take a look at what you did last year (or, if you are a new non-profit, what similar small non-profits in the same field and general location as yours do). Then ask the following questions: What were your bottom two performing tactics? How can they be tweaked to raise more revenue this year? Should you ax any of the tactics you have used in the past? What two tactics that you are not currently using do you most want to add to your repertoire? How can you add these tactics on a trial basis for the coming year?

Use the answers to these questions to develop a written tactical calendar for your fundraising team.