The Simple Fundraising Recipe that Works for Every Non-Profit 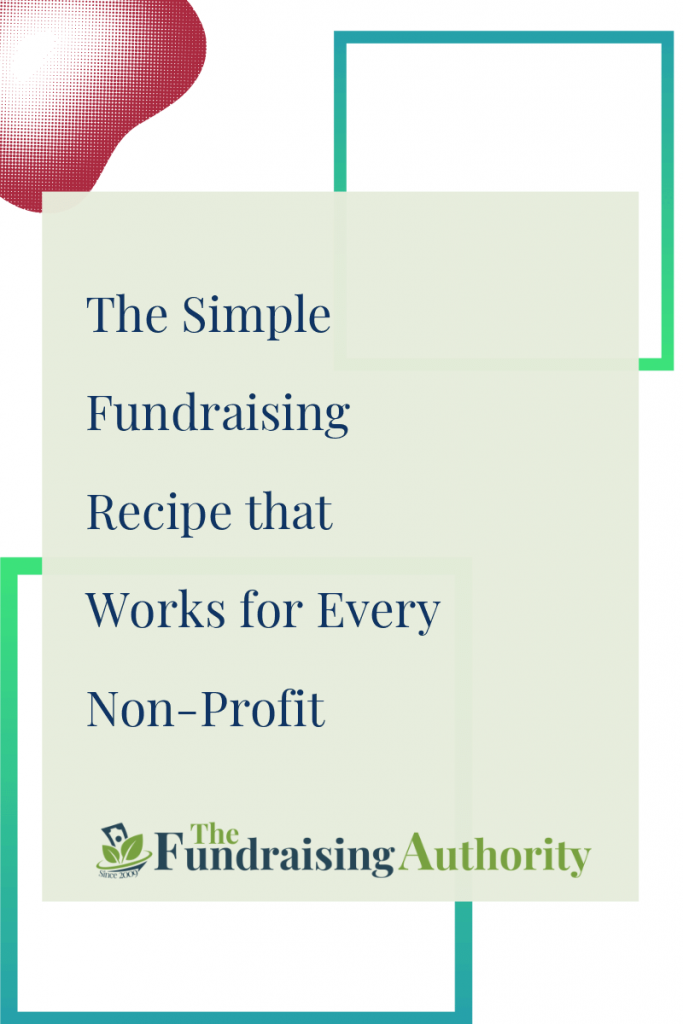 Good recipes are a road map to a desired outcome. Do you want to eat a homemade load of bread? Follow these 10 steps, and you’ll have one in a couple of hours.

Recipes can be easy or hard. They can take practice and require tinkering. But once someone develops a good recipe, anyone should be able to follow it, so long as they have the right ingredients and equipment.

Did you know that there’s a recipe for non-profit fundraising? A step-by-step formula that has been perfected over the years and which results in a growing, thriving, well-funded organization? In this article, I’m going to walk you through the fundraising recipe that works for every non-profit.

The first step of the fundraising recipe is to cast a compelling vision for your organization. Whether you’re just one person with a dream or a non-profit that has been around for 92 years, your organization needs to develop a message that gets people excited about what you do.

You need to tell your donors and prospects…

This vision / message is normally contained in your non-profit’s case for support, and must permeate everything you do at your organization.

Step 2: Gather a Group of Supporters

If you’re starting a new organization, this means talking with your friends, coworkers, family and neighbors. If you’re already an established non-profit looking to launch a new fundraising effort, this means putting together a core group from among your current donors, volunteers, prospects and other friends of the organization.

Step 3: Communicate Your Vision to an Ever-Growing Community

The third step is to take the message you developed in Step 1 and communicate it regularly to the group you gathered in Step 2 to build a strong relationship with them. This means doing meetings, making calls, sending out newsletters, holding non-ask events, etc. to keep in touch with your supporters.

The group of people you are communicating with should always be growing. This requires asking current donors, supporters and friends to introduce you to new prospects, so that you can build a relationship with them. This also means doing outreach events and pursuing networking opportunities to organically grow your base of support.

Once you communicate with your supporters and build a relationship with them, the next step is to ask them for financial support. This ask can be accomplished through a personal conversation (in-person or over the phone), or through other tactics such as fundraising events, direct mail, online fundraising, etc.

You will need to ask your supporters for gifts regularly (usually more than once per year, per supporter) and be focused on stewarding your donors to make sure that they keep giving each and every year as well as upgrading their gifts.

The fifth and final step is to encourage your donors to become evangelists for your non-profit. This means building up a strong enough relationship, and casting such a compelling vision, that when you ask your donors to open up their networks to introduce you to new potential donors, they gladly say “yes!”

Your job as a fundraiser is to keep as many of your donors as possible engaged in Steps 3-5, which are a never-ending loop of support for your organization. Communicate with donors… ask them for a gift… ask them to help you expand your network… then communicate with them again.

This Recipe Works for Every Fundraising Need

This fundraising recipe works for all of your development needs. Launching a new fundraising event? If you want it to be a success, you’ll need to cast a vision around it, gather a group of supporters, communicate with them, make asks, and then turn them into evangelists for the event.

Running a 150 year old organization that has plateaued? Develop a re-energized vision, gather your most ardent supporters as a core group, communicate that vision, make asks, and get the core group engaged in evangelizing your other supporters, as well as new donors from within their networks.

No matter where you are starting from or how far you have to go, the fundraising recipe works for every non-profit.