Non-Profit Entrepreneurs Can Change the World 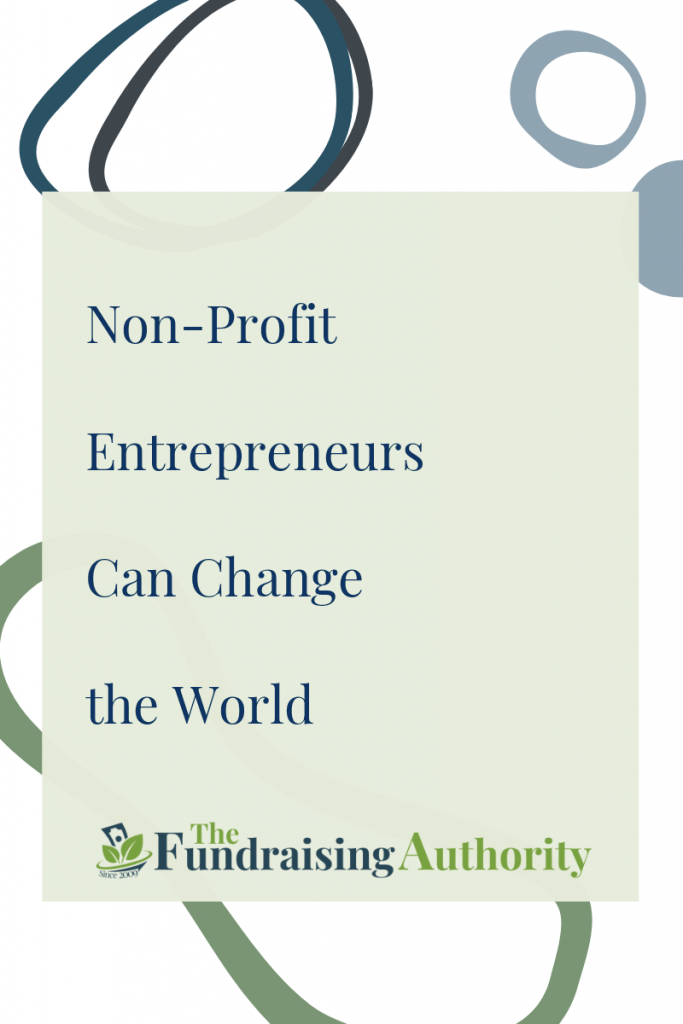 Today, I am asking you to think like an entrepreneur.

But still…. Today, I am asking you to think like an entrepreneur.

What is an entrepreneur? Let’s look at the definitions…

According to Wikipedia, an entrepreneur is “a person who is willing to launch a new venture or enterprise and accept full responsibility for the outcome.”

According to the Merriam-Webster Dictionary, an entrepreneur is “one who organizes, manages, and assumes the risks of a business or enterprise.”

Maybe it does. I hope it does. But at too many non-profits, I have seen just the opposite: a culture of “let’s do it this way because we always do it this way” (no risk, no matter the potential rewards), and an environment where no one puts themselves on the line and takes responsibility for ideas, decisions, and outside the box thinking.

How many charitable organizations have you been in where you have heard someone say, “Here’s a crazy idea… I think it will work, and I will drive it, organize it, and make sure it succeeds!” If you’re like me, the answer is: very few.

Yet, non-profits are exactly the place where we need entrepreneurs. Charity organizations with big, world-changing missions cry out for people who will stand up and be counted. People who will think outside the box, design new programs and organize new endeavors, and who will take responsibility for those projects… people who will say, “If it succeeds, it was because of me. If it fails, it was my fault. I will make it work.”

I think one reason non-profits don’t have as many of those types of people is because of a deeply ingrained culture difference. In the start-up world of for-profit businesses, failure is de rigueur… start-up entrepreneurs take risks, and many (most!) times fail. When they do fail, they clean up the mess, and then try again (and again… and again…). It’s been said that investors in a start-up business like to see at least one business failure on an aspiring entrepreneur’s resume, because it proves the person has learned valuable lessons and knows how to keep going, despite failure.

In many non-profits, however, there is no such culture of experimentation, of failing and failing and trying and trying, until you finally succeed in changing the world in one fell swoop. Instead, in many charitable organizations, you see things like:

– “Our goal this year is to raise revenue 2.5%.” (Where is the non-profit entrepreneur who will stand up and say, “No! We need to double our revenue this year to have a real impact! That’s our goal, and I will be responsible for making it happen!”)

– “Let’s try to serve an additional 1% of the afflicted population this year.” (Where is the non-profit entrepreneur who will jump out of their seat and shout, “Are you kidding me? 1%? We need to think bigger! I have a new project that will increase our ability to serve afflicted persons by 50% over the next two years! My goal this year is to serve 25% more people than last year. I’m heading up a team to make it happen. Who’s with me?”)

That doesn’t mean you can’t be one, in your non-profit organization, today…

If your mission matters, stand up and be counted. Think big. Set a crazy, unreachable, unbelievable goal, take responsibility for making it happen, and work your tail off making sure you reach it. Be a non-profit entrepreneur, and change the world.