What Exactly Should My Non-Profit DO on Social Media? 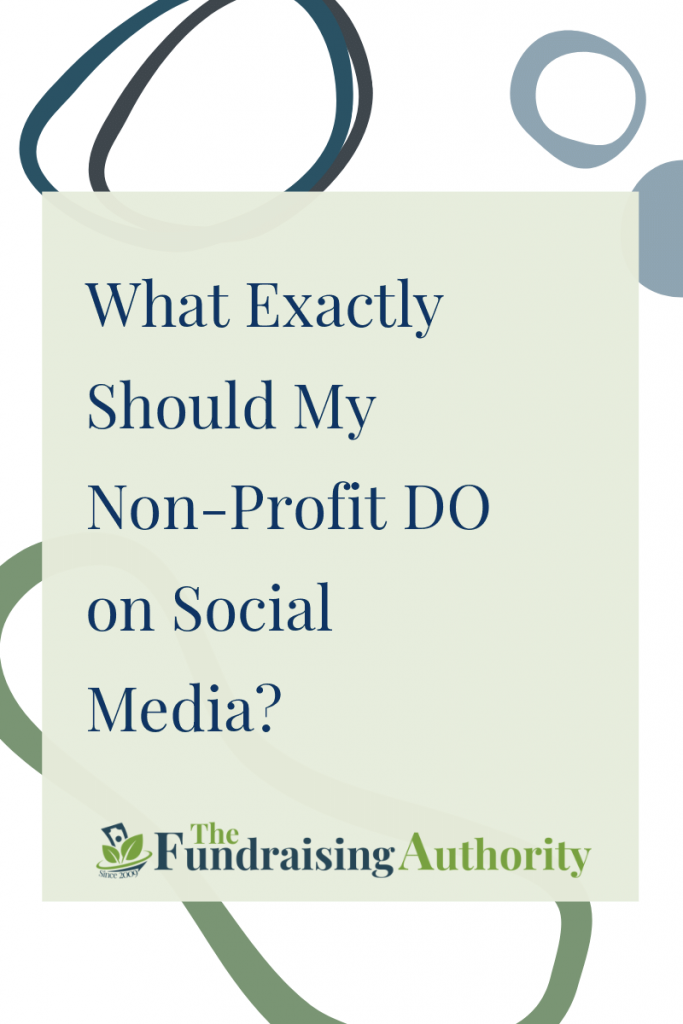 On the one extreme, you have non-profits who think that their social media presence is the single most important fundraising and marketing strategy in their arsenal. They’re on the networks all day, building relationships, asking and answering questions, sharing links and trying to build up a “presence.”

On the other extreme, you have non-profits who think that social networks are just an add-on, somewhere else to send out your quarterly fundraising appeal. These organizations are never on the sites, have few followers, and use their accounts to simply copy and paste links and text from whatever they’re already sending out in the mail or posting on their website.

As with most things in fundraising, the correct approach lies somewhere in between. Let’s look at organizations on both extremes, to largest mistake each is making:

On the one hand, we have the “all-in” non-profit that spends a huge percentage of its resources on social media fundraising and marketing. Here’s the main problem with this approach: your social networking connections (including your Facebook friends, your Twitter followers, LinkedIn connections, etc.) are worth far less to you than those who sign-up for your e-mail newsletter. Similarly, your Facebook page is worth far less to you than your non-profit website’s landing page.

Think about it. You don’t own your Facebook page. The rules there could change at any time. But on your website, you’re the boss. You want to put a fundraising thermometer up on the site that takes three scrolling pages of space? Do it! You want a flashing header? Done! While I don’t recommend either of those tactics, just trying doing them on Facebook – you can’t, because you don’t own your page.

Think about your Twitter followers – how many of them see each tweet that you send out? 50%? No way. 30%? Not even close. Depending on when you send out a tweet, it’s likely that only 1-5% of your followers see that tweet – and even fewer click on the links it contains.

Now think about your e-mail newsletter list. When you send out an e-mail to your list, how many people will open and read it? Well, if you’re sending out regular, entertaining, well-designed e-mails to those who opt-in on your site? It’s likely that at least 25% of the recipients will open it, and quite possible that you get 50% to do so.

Ok, now let’s take a look at the other extreme… the organization that disregards social networking sites, and instead sets up pro-forma profiles and sends out a link or update every couple of weeks or less. What is an organization like that doing wrong?

It’s simple… They are missing a huge opportunity. While your website and your e-mail list are worth more to you than your social profiles and your Twitter followers and Facebook friends, it’s also true that social networking sites present a big opportunity for your organization to stay connected with your supporters and drum up new prospects.

Maintaining the right kind of social media presence… one which smartly looks for new connections, pushes people back to your site, builds brand awareness and doesn’t waste time (a huge temptation)… can slowly but surely add new dollars, donors, and friends to your organization.