Why Charity: Water’s 100% Model is Bad for Non-Profits and Donors Alike 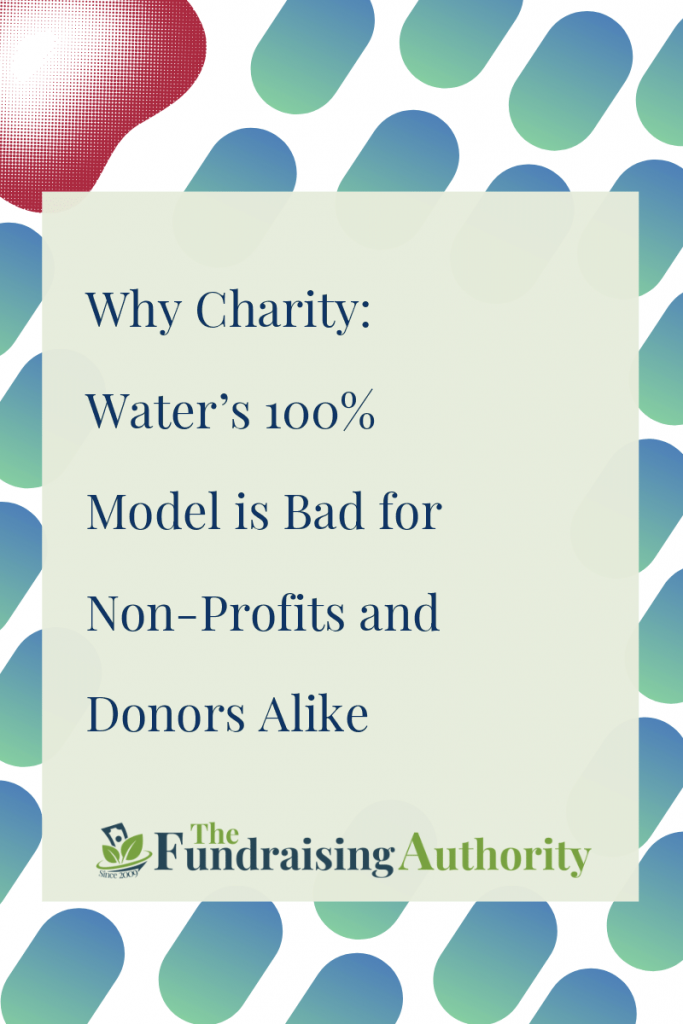 If you’re at all active on social media or in non-profit marketing, you’ve probably heard of Charity: Water. They’re one of Silicon Valley’s favorite charities, they are exceptionally good at marketing, and by most accounts they do good work.

Charity: Water also aggressively markets what they call the “100% Model” to donors, promising that 100% of the money donated through “public donations” will go directly to programs, with a group of major donors, board members and foundations providing the money the organization needs to pay for overhead expenses.

By itself, this is nothing new. A number of non-profits have, over the years, promised that 100% of monies donated during a particular appeal or for a particular program would go directly to mission-related work. What is different is the fact that Charity: Water is making this pledge the norm for their donors, promising that 100% of the money you give will go to programs, 100% of the time. Add to that the skill with which Charity: Water is marketing this “100% Model” message, and it is becoming something much more sinister.

Charity: Water’s 100% Model is bad for non-profits, donors, fundraisers, and the non-profit sector in general. And it’s time to shine a light on it.

Of course, we all know that for the most part, non-profit donations are fungible. Charity: Water may be giving 100% of most people’s (small) donations to programs, but that means that they are forced to use 100% of a few people’s (very large) donations on overhead.

To simplify things, let’s say that Charity: Water raises $1,000 from the public and $100 from the folks who fund their overhead. They spend $100 on overhead and $1,000 on programs, and announce that they are operating under an innovative “100% Model.”

Now, let’s say that instead of segregating funds like that, they raise the same $1,100 from the public and their institutional funders combined, and spend the same $100 on overhead and $1,000 on programs. In both instances, they have spent 10% on overhead. What’s changed? Nothing. Except now, they can’t claim to use a “100% Model.” It’s smoke and mirrors. All non-profits have overhead. Overhead necessarily reduces the amount of money that goes towards programs. Charity: Water is no different.

Causing Problems for Other Non-Profits and Causes

After reading the above, you may find yourself saying, “Sure, technically you are right, Charity: Water is using smoke and mirrors to make it look like they created a new innovative funding model, but what’s the harm? Maybe some people will give who wouldn’t otherwise have given as a result of this model!”

Except there is a problem – a very real problem – that Charity: Water is creating for other non-profits and causes (and donors as well). They are making donors believe that it is possible to fund non-profit work without funding overhead and administrative expenses. (Not to mention teaching donors the fib that overhead expenses are necessarily bad).

And that’s a lie. A very big lie, and one that presents a huge problem for charities worldwide.

The success of Charity: Water’s 100% Model requires that the organization aggressively market this falsehood. If people believe that they should be looking for organizations who will promise to use 100% of their donations on programs (with nothing going towards overhead) Charity: Water wins, because it is one of the few non-profits which claims to allow donors to do just that.

That belief feeds the “overhead myth,” and it leaves other non-profits in a precarious position. They can either launch their own “100% Model,” effectively lying to their donors by acting like these donations aren’t fungible with the “overhead” donations, or they can tell the truth, risking losing donations as a result.

Remember – this isn’t a theoretical exercise. Every day, non-profits face questions from donors about their overhead expenses. These donors want to know why they are spending 11% on overhead instead of 10%, or whether they spend too much on paid fundraisers. Charity: Water’s aggressive marketing of the 100% model fuels this problem. And as a result, homeless shelters, addiction recovery centers, schools, hospitals, and other non-profits that are doing good work have trouble recruiting new and larger donors.

The 100% Model also feeds donor malaise. Think of the donor who has bought into Charity: Water’s marketing and assumes he will be able to find other non-profits in other mission fields who will agree to spend 100% of his donations on programs. Imagine his shock when he can’t find other organizations offering the same program. He’ll assume that other non-profits are doing something wrong, or maybe even unethical, when in fact they are spending the same or less on overhead as Charity: Water.

A Call to Action

It’s clear that Charity: Water’s 100% Model is bad for donors, bad for non-profits, and bad for the sector as a whole. It also borders on an outright lie. What can you do about it?

First, reject the temptation to follow this path yourself. Instead, be sure that your non-profit works hard to keep overhead expenses tied directly to your ability to do your work, and transparent about what it costs to run your organization.

Second, when donors ask about “overhead,” tell them the truth… that overhead (and fundraising expenses) allow you to carry out your mission, do good work, and expand your capacity.

And third, consider sending an e-mail to Charity: Water (or sending them a tweet at @CharityWater) to call on them to abandon their misguided 100% Model and by doing so to help improve transparency and trust for their donors and the entire non-profit sector.