Case Study: How to Double the Revenue from Your Next Fundraising Event 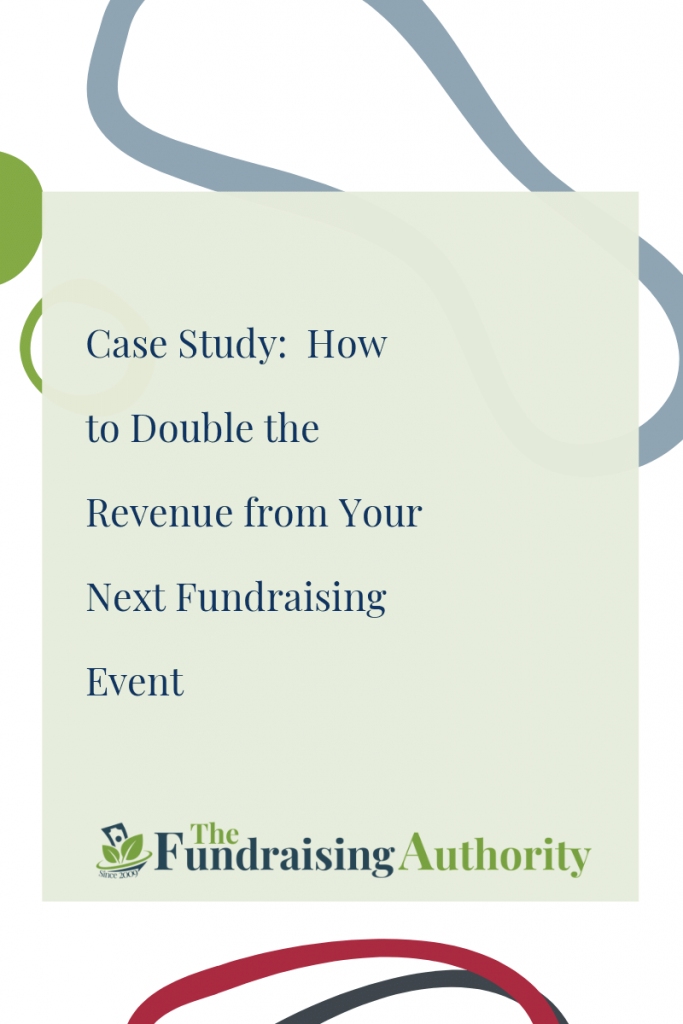 I recently worked with a non-profit organization on a major fundraising event where we were able to double the amount of fundraising revenue for this year’s event over last year’s, and I wanted to share the lessons learned with you in this article.

The organization in question holds one major fundraising event each year that provides a significant portion of their revenue for the coming year. Thus, doubling the amount raised was/is a game changer for them. Here’s how they did it, and how your school, church or charity can do it too:

The organization had traditionally run on a “fly by the seat of your pants” planning mode… once people starting realizing that the annual event was only four or five months away, they would fly into panic mode and get things cranking.

We decided to create a fundraising plan for this event almost one year out from the actual event. This changed two things from how it was normally done at this non-profit. First, we created a plan just for the event, which they had never done before. An event fundraising plan is crucial for any size event, but particularly one where you are trying to raise money from hundreds of sponsors and attendees.

Second, we not only created a plan, but created it almost 12 months before the actual event. This gave us plenty of time to implement the plan that we had come up with.

2. Build and Capitalize on Relationships

Planning that far in advance allowed us to see one key concern with being able to dramatically increase event revenue: the organization simply didn’t have enough large and mid-sized donors to provide sponsorships for the event.

We realized early on that we would not be able to double revenue simply by selling more tickets… we would have to sell literally thousands more, and that wasn’t a remote possibility. Instead, we focused on sponsorships… the event had historically raised a significant sum from event sponsors, and we decided that this was the area to focus on. The only problem was that basically every individual and company in the organization’s orbit who could give at that level for the event was already doing so.

Our solution? Build more relationships. The Director of Development was tasked with reaching out to lapsed donors as well as new prospects who were within our reach, and spend the first six months of our twelve month plan building relationships (without making an ask).

The next key ingredient of our plan was to start our fundraising early. We decided to begin solicitations a full six months before the event. We started by sending out renewal letters to the previous year’s sponsors, and following up with a phone call. This plan worked far better than we even hoped, with over 90% of the previous year’s sponsors renewing (many at a higher level than the year before, due to our cultivation efforts) within 60 days of sending out that solicitation, which meant we still had four months to work on new donors, confident in the fact that we had already matched the previous year’s fundraising revenue.

The staff then focused on reaching out to the new prospects that the Director of Development had spent the past six months cultivating, as well as working with board members and other supporters to reach into their own networks.

We didn’t make “soft asks,” telling people about the event and our need for support, and hoping they would volunteer a donation. Instead, we pegged everyone for a donation level and went out and made an explicit ask… “Would you be willing to sponsor the event at the $50,000 level this year? No? How about $25,000?” Actually making asks is key, and something far too many event organizers shy away from.

5. Keep Your Number Front and Center

The final thing we did that the organization had never done before was keep a running tally of pledges for the event, and publish that number internally and to our board as often as possible. Keeping your number front and center can be something a simple as sending out a regular email to your staff, board, and event host committee that says,” We’ve raised $10,000 towards our $35,000 goal. Please keep plugging away!”

Keeping our number front and center kept everyone honest, and didn’t let our board or staff off the hook by letting them think that “someone else” was responsible for the event goal. Everyone could see what progress we were or weren’t making, and would know what we needed them to do: make asks! (Another tip for keeping your number front and center can be found here: Visualizing Your Major Donor Efforts).

At the end of the day, we were successful in doubling our fundraising event revenue. This year’s event raised just over $500,000 which represented a 100% increase over the previous year’s $250,000 revenue. Along the way, we learned valuable lessons which will inform the organization’s fundraising strategy for many, many years.