4 Strategies for Raising More from Your Non-Profit Fundraising Letters 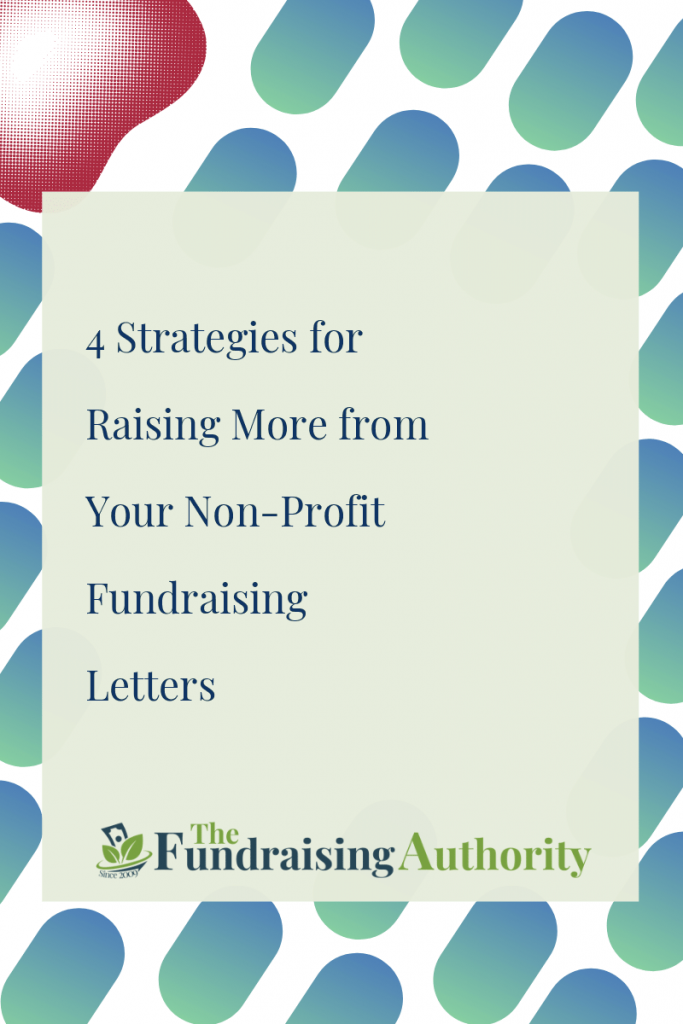 Strategy #1: Directly Show the Impact a Donation Will Make on the World

If they do anything, your fundraising letters should directly show your donors and prospects the impact that making a donation to your organization – today – will make. Do this by telling donors what an impact your organization is already making, what their money has been used for in the past, telling compelling stories of the people you are helping, and laying out a huge and compelling vision for the future.

Strategy #2: Focus on Both Immediate Gifts and Lifetime Donor Value

When you send out a direct mail fundraising letter, you want an immediate gift. You want donors to take out the enclosed reply card, fill it out, and place it (and a check!) in the pre-addressed reply envelope you supply. Easy-peasey.

But an immediate gift is not the only (or even the biggest) thing you want from a donor. What you really want is to build a lifelong relationship with a new and committed supporter of your organization. Rather than a one-time $50 gift, you’d prefer $25 (or $50, or $100) per month each and every month for the next three years. You’d prefer someone who gives $1,000 per year to your annual appeal over someone who gives $2,000 this year and is never heard from again. In short, while immediate gifts are nice, what you are really looking for is lifetime donor value.

The moral here is that you don’t want to do anything in your initial direct mail letter that will encourage your prospects to give now, but hurt your potential relationship with them such that it will reduce the amount they give in the future. Thus, make a concrete ask, but not a hard sell. Ask for money now… but don’t (as one organization I recently talked with did) tell people that if they just give now, you won’t bother them again all year. You’re not bothering them… they are your partner in making the world a better place!

Which mailing would you rather send out at your organization?

Expensive does not always equal good and cheap doesn’t always equal bad. Remember that the measurement you should care about is not the cost to send out a mailing, but what the overall return on investment (ROI) is for the letter/package.

Be very, very careful in when your direct mail letters “drop.” Take a good long look at the calendar to make sure that your letters aren’t going to be received right in the middle of a direct mail crush or near a holiday when people aren’t in the mood to open mail.

For example, if you’re sending out a Christmas mailing, would you rather it drops on December 21st or December 24th? Many organizations would say the latter, but I would rather have my letter drop on the 21st, while people still have some bandwidth available for things other than egg-nog and Christmas carols.

Similarly, if you are mailing to an area with a large Jewish population, have you taken a look at the Jewish holiday calendar? You don’t necessarily want your mailing to hit mailboxes on Yom Kippur or Passover, when people are occupied with other things.

Elections are another tricky mail time… in many countries including the US, political campaigns heavily rely on direct mailers to get out their message. This means that during the week before Election Day, people are going to be inundated with direct mail from multiple (in some cases dozens) of candidates. Do you really want your fundraising letter to have to fight for attention with dozens or hundreds of other “urgent” letters?