The Power of Positive Donor Communications 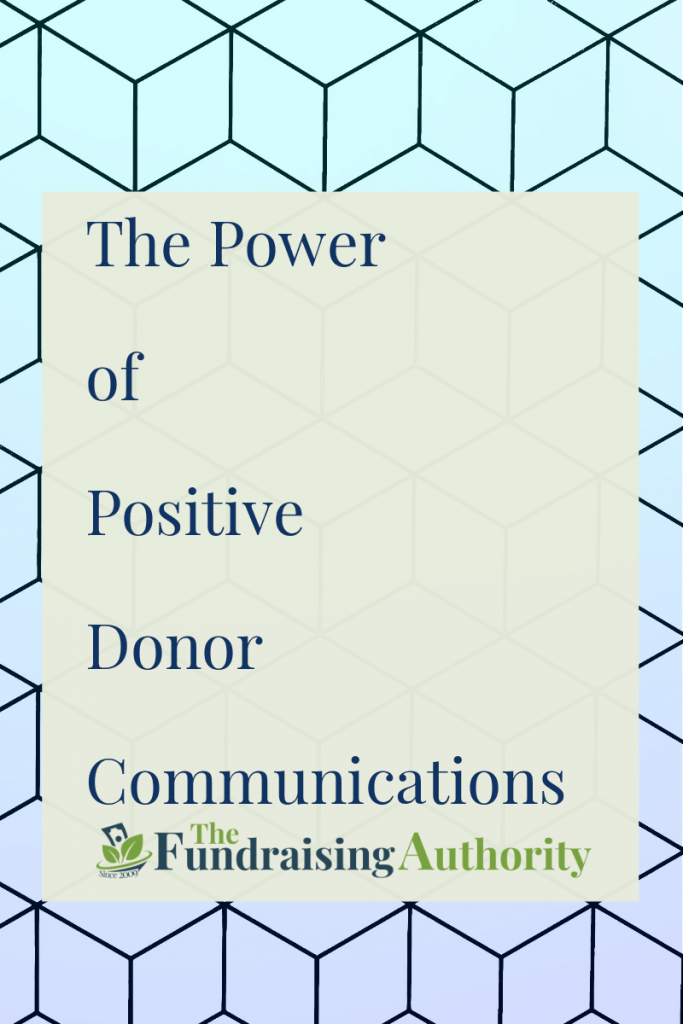 Over the past month I’ve received one fundraising letter and two fundraising e-mails that attempted to shame me into making a gift.

One asked why I hadn’t given in the past. One told me all of the sad things that were going to happen if I didn’t donate. And one hinted that doing nothing (by not donating) was nearly as bad as causing the problem.

I am a regular donor to donor to one of these non-profits. The second, I have given to once or twice in the past. The third was a prospecting letter, I had never previously donated to that organization. All three are making a major mistake. These types of fundraising letters can sometimes be profitable in the short run, but in the long term, they hurt the relationship you are trying to build with your donors.

How Donors Should Feel When they Read Your Letters

The big mistake these organizations are making is that they are using their fundraising letters to make donors feel bad, hoping that those negative feelings will translate into revenue. The goal here is that the letter will make donors feel bad and guilty, and that the donors will then send in checks to assuage that guilt. Does that sound like the recipe for strong, lifelong donor relationships? It’s not…

When reading your donor communications (including your fundraising letters and e-mails, your newsletters, your website, viewing your videos, etc.) your donors should feel inspired. They should feel like your organization is making a huge positive impact in the world (or in your local community) and that they can be an important part of that change.

That’s not to say that your letters and e-mails shouldn’t evoke strong emotions… they should. Show your donors the problem you are working to eradicate. Tell them stories about those who are afflicted by the disease you are fighting, the poverty you are trying to weed out, or the abuses you are seeking to eliminate.

It’s ok to make your donors cry. But never tell your donors that they are part of the problem. Instead, cast a vision for them where they can be the hero of the story. Show them how they can make a huge difference by donating to your cause.

Think In the Long Term

Smart non-profits are focused on lifetime donor value. They know that the only way to build sustainable development programs is by finding donors who will give to the organization over and over again. These donors are more likely to upgrade and refer their friends, family and colleagues to your organization as well.

On the other hand, donors who give to allay a false sense of guilt that you have built up in them may give, but will harbor a sense of anger and humiliation in regards to your non-profit. Instead of looking forward to receiving your letters and e-mails, they’ll rue them as yet another chance to be forced to open their wallets, or else face more berating and guilt. I can guarantee you that these donors will stop giving as soon as possible, and will likely never upgrade or refer new donors to your charity.

Think long term about your fundraising program. Build up your donors as people who have the chance to change the world through their association with your non-profit. Tell them about the problem you are fighting, and then cast a positive vision for better future.