Conversation is the Foundation of Fundraising 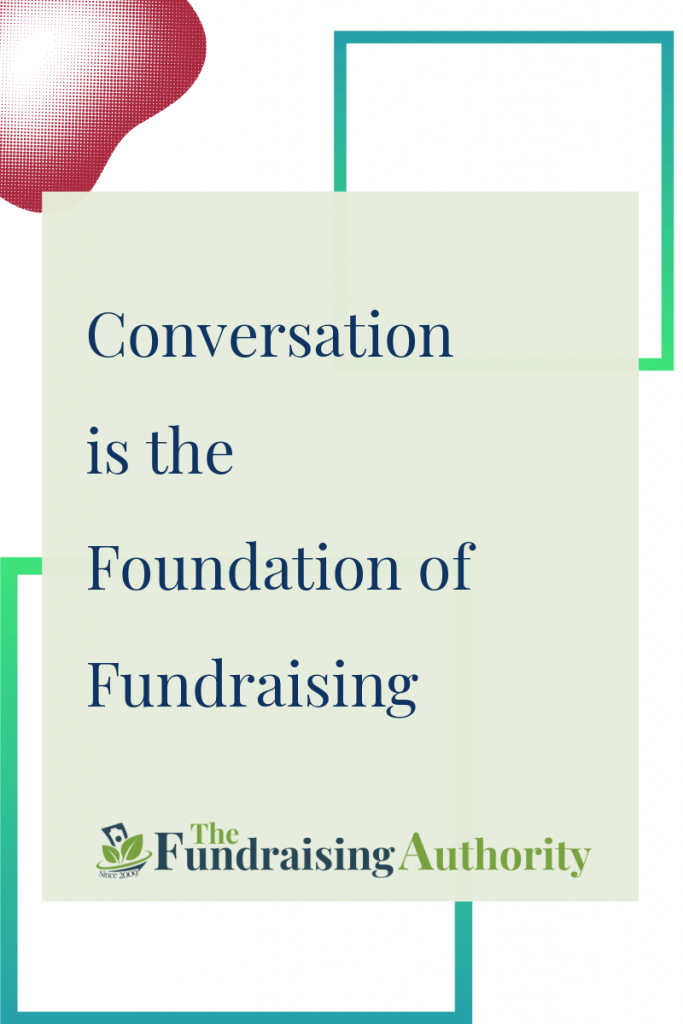 I want to tell you about the most important lesson I’ve learned in my fundraising career.

It’s not something that I learned overnight, or in one big “A-ha!” type moment. It’s a lesson that has sunk in gradually, as I have engaged in varied fundraising strategies and worked with countless organizations.

This might seem like a self-evident maxim, but it’s really not… at least it wasn’t to me.

Over and Over Again…

I realized the truth of this statement as I found myself giving the same answer to fundraising questions over and over again. The answer that I so oft-repeated was, “Let’s go out and talk to them.”

You see, whether it is from an Executive Director, Development Director, board member, development consultant, fundraising team member or volunteer, I am often asked questions like:

“We have a couple of major donors, but we need to find more. What should we do?”

“Our organization has a strong base of sponsors for our annual event, but we need them to give more this year. How can we do that?

“My board doesn’t raise money for our non-profit. What can I do to change that?”

The answer I ended up giving to these questions, and many more, was “Let’s go out and talk to them.” Let’s sit down with our major donors and have a conversation… and ask them to refer their friends. Let’s have lunch with our event sponsors, and ask them to increase their gift this year. Let’s talk to our most influential board members about changing the culture of giving and referrals on the board.

Let’s have a conversation. Let’s talk.

The Siren Song of Easy Communication

The biggest problem I had in coming to the realization that conversation – real, in person (or if necessary, on the phone) conversation between two people – is the bedrock of all fundraising was the siren song of easy communication.

E-mail, snail mail letters, and announcements made at meetings are cheap and easy ways to communicate with people. And so often, they are the answer that is given for the questions I noted above. Think about it… how many times have you been at a development meeting, and when the question was asked, “How do we get our sponsors to give more this year,” the answer was “Let’s send them a letter?”

Now, I am not saying that sending a letter is always the wrong choice. What I am saying, though, is that having a conversation is much, much more effective almost every fundraising circumstance. Even better is a conversation followed by a letter.

E-mail and snail mail are great for staying in touch with your donors. Group meetings are great for cultivation and stewardship. Direct mail is good for small, ongoing asks (like an annual campaign). But to really move the dial… to really build a relationship, make a big ask, or change the direction of your non-profit… you’re going to need to engage in real, person-to-person conversations with your donors and prospects.

The next time you want to increase your fundraising revenue or capacity, instead of sending out a letter or an e-mail, think about going out to see your donors and prospects. Use these meetings to build stronger relationships, seek referrals and make asks. The answer to many of your fundraising questions just might be, “Let’s have a conversation.”